Yesterday's post was all about how I missed out on some quality day drinking because I couldn't take a day off for the McLean Ave street festival... I did mention, though, that I had more fun on the job than is seemly.

I arrived on the job and was informed that we had a cute overload, a procession of baby turtles which were walking along the pedestrian path behind our Visitors' Center. The manager on duty, a kindly young woman, told me that she had stopped one of our visitors before he accidentally trod on one of these little critters... Then she decided that she should relocate it to the vicinity of the onsite pond. She walked, turtle in hand, to the pond, but she didn't like a particular drop on the bank, so she sought out a gentler descent near the outflow stream. All along, she was concerned about the stagnant water in one spot, the subpar aesthetics of another spot- all the while being bitten by mosquitoes and worrying about ticks and the possibility of toxic algae blooms. Rehashing an old 'Simpsons' joke, I told her not to worry, that all of the pathogens she might be picking up would cancel each other out. I also quipped that she shouldn't have worried so much about the little turtle, "They have more hit points than you would expect." Seriously, these little guys are like tiny tanks, they are muscular enough to dig themselves out of their nest and begin their journey, in this case about a hundred meters, to the water.

Then, it was on to the great turtle hatchling roundup. We cordoned off the area near the nest, which I located under some bushes behind the building. Our custodial contractor was particularly adept at spotting baby turtles, so I dubbed her 'the turtle detective'. She found one hatchling that wasn't moving, and we were all bummed at the prospect of it being dead, until it moved, and I joked that she should bring it home and name it Lazarus... I suggested that it would be fun to bring it to her AP Biology class on Monday (and that she could return it later that week). In about twenty minutes, we gathered a dozen hatchlings: 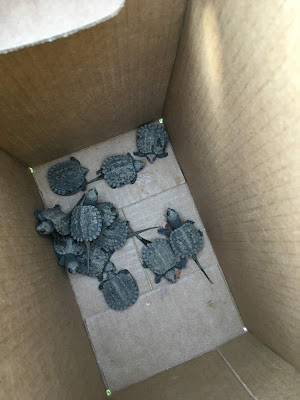 As I once noted, the little things look like Pokémon, though they are destined to be kaiju if they survive the rigors of youth. I mean, look at this cutie, wouldn't you want to capture it and make it fight other little animals? 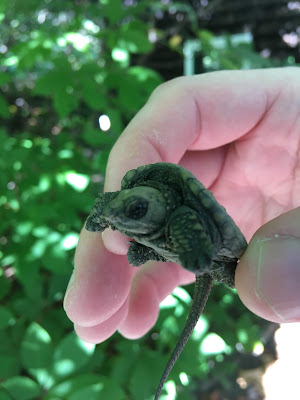 "Chelydra serpentina, I choose you!"
"I'll bite your thumb, you big bum..."

When we locked up the site, and I bid everybody else adieu, I took the box full of hatchlings to a spot near the pond, and released them, putting them on a sheet of paper to make a group photo stand out: 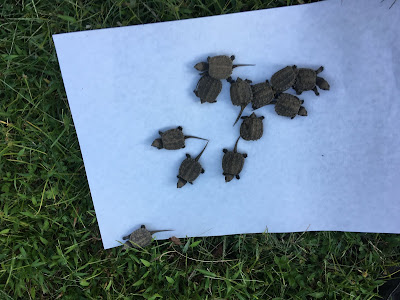 I actually separated them into several groups, each placed in a different spot so as to avoid competition with each other. The site now clear of humans besides myself, I took a hands off approach, and noted that the procession of turtles continued, with the hatchlings pacing with about two meters between them. I watched the procession until sundown. Today, the MOD will enlist our resident artist to create a 'BABY TURTLE CROSSING' sign in case the parade continues.

Posted by Big Bad Bald Bastard at 2:12 AM

HELLO! WELCOME TO THE GREAT TEMPLE OF ILLUMINATI WORLD RICHES.

Are you a business Man, politician, musical, student and you want to be rich, powerful and be famous in life.
You can achieve your dreams by being a member of the Illuminati brotherhood, and receive a monthly salary of $500,000 USD.
We are ready to change your life, we can make your Dreams come true, also we are going to give you everything that you need in this Life ....

With this all your dreams and heart desire can be fully accomplish,So have you make up your mind that you want to join the great Illuminati brotherhood to
become rich and famous in life population and also you will be protected from all evils against you and your family.
If you're really ready to be a member of the great Illuminati Brotherhood then contact us via
WhatsApp: +1 315 203 9948 or our official Email: {officialilluminati999@gmail.com}