Arachnaphobia Test for a Repentant Homewrecker

It wasn't the sort of sight that bothers me, but I imagine it would make an arachnaphobe blanch... a fat Araneus, with an abdomen the size of a fingernail, sitting near a padlock I needed to get to in order to lock up one of the gates at work: 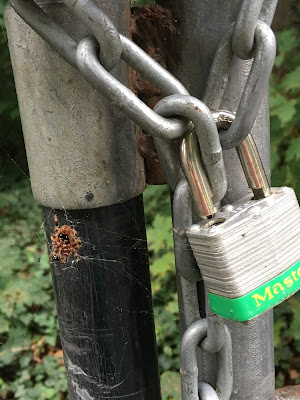 I'm pretty comfortable around spiders, even big ones, but spiders aren't that comfortable around humans who need to break up their homes in order to accomplish a task. The chain shifted, the web sundered, the poor spider beat a hasty abseil to the ground. Late summer and early fall are the peak of Araneus activity, and I have to confess that I have destroyed many a web while walking the site and performing my routine duties. I feel somewhat bad about this, because these critters must be doing a number on the local mosquito population... it's just that they often build their homes in inconveniently situated, by which I mean heavily trafficked, areas.

I have two of these beauties building their webs every night near the backdoor light under the gutter. Early one morning when it was still dark I was enthralled watching one of them spin up a hapless moth in a cocoon of silk and save it for later. There were other cocoons in the web as from earlier captures - she fed well that day. A few nights ago I watched the same spider rebuild her web after some pretty ferocious winds ripped through our area. A few hours later her web was done, and again I was enthralled with the speed at which she rocketed up, down and around her web, the supreme hunter that she is, madly cocooning her dinner. I could watch her for hours, but alas, I need my sleep.