Not a Manic Pixie Dream Girl...

One of my weekly must reads is Tor Books' Lovecraft Reread, in which Ruthanna Emrys and Anne M. Pillsworth conduct a study of the writings of H.P. Lovecraft and authors, who like themselves, were inspired by the 'Lovecraft Mythos'. It's a fun sort of book club, and Ruthanna and Anne do a great job at exploring and deconstructing the good (an imaginative blend of science fiction and horror fiction) and bad (racism and xenophobia) of Lovecraft.

The current discussion involves “The Seal of R’lyeh” by August Derleth who is simultaneously lauded for saving the writings of Lovecraft from lapsing into obscurity and derided for imposing his own biases on Lovecraft's conceptions, namely a trite good-vs-evil narrative and a silly correspondence between Lovecraft's alien 'gods' and the classic elements. Lovecraft's eldritch elders were portrayed as being so alien that human concepts of morality were meaningless to them and human knowledge of matter was insufficient to comprehend their makeup. Derleth's fiction in effect hammered Lovecraft's creations into anthropocentric holes.

Since I'm discussing the story and its tropes, I figure that I should give any readers a huge SPOILER WARNING for a whole bunch of stories, starting with H.P. Lovecraft's The Shadow Over Innsmouth. For those who have no interest in reading the story, but want to continue, here's a nice minute-and-a-half summary:

Alright, with that out of the way, Derleth's story is based on The Shadow Over Innsmouth, a continuation of the narrative of the inhabitants of that decaying seaside town. It follows the Derlethian cliché of a young man inheriting an ancestral home and discovering the recondite, outré lore hidden within. Derleth used the same trope in such forgettable stories as "The Return of Hastur" and "Beyond the Threshold"... lot of grandfatherly and avuncular wizards in Derleth's Lovecraft pastiches. In the case of "The Seal of R’lyeh", the protagonist inherits a home in the vicinity of Innsmouth, which instantly telegraphs the direction in which the narrative will go to the Lovecraft savvy. The story does, however, portray the Innsmouth natives in a somewhat sympathetic light, and even features an example of a 'sexy Deep One':


She was twenty-five, but there were days when she looked much younger, and other days when she looked older. I went to her home, found her, asked her to come towork for me days. She had a car of her own, even if but an old-fashioned Model T; she could drive up and back; and the prospect of working in what she called strangely,“Sylvan’s hiding,” seemed to appeal to her. Indeed, she seemed almost eager to come, and promised to come that day still, if I wished her to. She was not a good-looking girl,but, like my uncle, she was strangely attractive to me, however much she may have turned others away; there was a certain charm about her wide, flat-lipped mouth, and her eyes, which were undeniably cold, seemed often very warm to me.


Even though the initial portrayal of the Deep Ones was meant to elicit revulsion, the sexy fishwife trope actually began with Lovecraft himself:


She was, I judge, about twenty-three at the time; and was taking a special course in mediaeval metaphysics at Miskatonic. The daughter of a friend of mine had met her before—in the Hall School at Kingsport—and had been inclined to shun her because of her odd reputation. She was dark, smallish, and very good-looking except for overprotuberant eyes; but something in her expression alienated extremely sensitive people. It was, however, largely her origin and conversation which caused average folk to avoid her. She was one of the Innsmouth Waites, and dark legends have clustered for generations about crumbling, half-deserted Innsmouth and its people. There are tales of horrible bargains about the year 1850, and of a strange element “not quite human” in the ancient families of the run-down fishing port—tales such as only old-time Yankees can devise and repeat with proper awesomeness.


The sexy Deep Ones trope has also cropped up in stories by James Wade and Charles Stross, and movies such as Grinding Nemo and The Shadow of Innsmouth adaptation Dagon, in which Macarena Gomez manages to be both sexy as hell and super-scary: 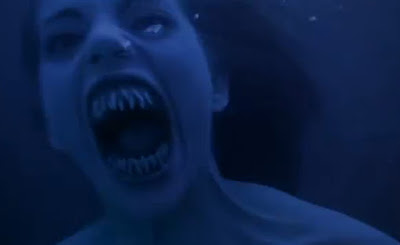 The story suffers from Derleth's typical sins of name-dropping Lovecraftian entities to pad the word count, and of referring to events from other 'mythos tales', which the narrator shouldn't be aware of. A little bit of Derleth goes a long way, but the general consensus, shared by myself, is that his stories usually wear out their welcome after a while. In one criticism of the story under consideration, Tor reader Ophid remarked:


I agree with most point, but Ada reminded me of a RomCom cliche: the woman who’s “different” simply because she’s not blonde and fashionably dressed and also just snarks at the male protagonist. Besides her appearance, I have no idea why Marius likes her; all she does is dangle what he doesn’t know in his face and makes digs at how little his parents taught him. Then she saves him from drowning and suddenly they’re married.


To which some Bastard replied: Heh, Manic Ichthy Dream Girl!

I had fun writing it. The Tor crowd is a nice bunch.