Tonight, I will be heading down to the beautiful Bell House, in the Gowanus section of Brooklyn, for this month's Secret Science Club lecture, which will feature Ebola specialist Dr Kartik Chandran of the Albert Einstein College of Medicine.

I have written about Ebola quite a bit, particularly back in 2014, when my brother Vincenzo was sent to Liberia in the wake of the Ebola outbreak. Much of Vin's work there involved building a medical infrastructure in the rural, underdeveloped areas in which the outbreak occurred. You want quick construction done, get the military involved... just ask The Prick with no Wall.

When I visited Vin and the family last Thanksgiving, I was drawn to a particular coffee cup for use in the morning. It had a bright magenta depiction of Barbie on it. The cup, as Vin related, had an unusual backstory. When Vin and the first rapid response team returned to Vicenza, Italy from their mission in Liberia, they had to undergo a three-week quarantine. The US Army, though, didn't do their homework, so the quarantine preparation was half-assed... the returning troops didn't have adequate supplies for their three weeks of isolation. For the record, Vin stated that the Liberian government treated the responders like national heroes.

In Italy, there was a mad dash to provide the necessities of existence to the quarantined personnel. The families of the Vicenza military base cleaned out their cupboards and donated items to the three-week isolates. Among the items were two somewhat garish coffee mugs with a magenta depiction of Barbie on them. Vin, being comfortable in his masculinity and a bit of a smart-aleck (both family traits), immediately grabbed one, while one of his comrades, of a similar bent, grabbed the other. They immediately dubbed them with the name of this post. Behold, Ebola Barbie: 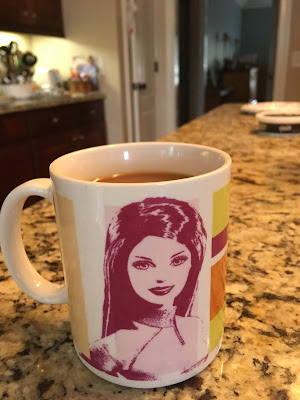 I like to picture Ebola Barbie as a scientist working in the Malibu Institute of Virology, working on developing antibodies to the lethal virus. Of course, she would jet off to CDC headquarters in Atlanta in a hot pink Cessna, and occasionally travel to Western and Central Africa to supply local medical personnel with antivirals. Mattel, get on this, with proceeds of the sales going to the WHO and other organizations.

At any rate, the mug is a bright reminder of my brother Vincenzo's efforts to build a medical infrastructure in the early days of the Ebola outbreak in 2014.