While the Boss is Away

This weekend has been characterized by inclement weather. We missed out on the three to six inches of snow that were forecast for the reason (sending local governments, caught off guard by the first snowstorm of the season, into a flurry of preparation), but received copious amounts of chilly rain, seasoned with occasional snow and sleet. Today was characterized by falling temperatures, with tonight expected to be bitter cold, with lows in the single digits and wind chills supposed to hit minus twenty Fahrenheit.

Because of this, one of the managers at work made an executive decision to bring the boss, by which I mean Ginger, home. Ordinarily, she is overseeing me, sometimes literally: 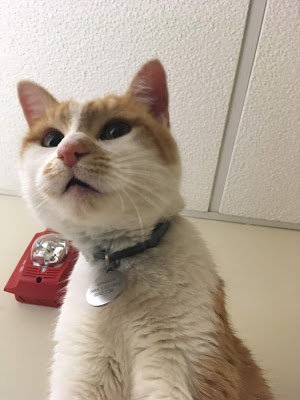 In this picture, she is standing atop a set of shelves in my office. She had been standing on my shoulders, as she often does for ease of head scritches, when she decided to jump up to check out the 'air up there' under the ceiling tiles and fire alarm units.

I missed Ginger over the weekend, but it's nice to know that she is off on a 'spa vacation' on such a brutal stretch of days.