Gotta Watch the Quiet Ones

On the job, we are in the midst of a major renovation/restoration project- a sprawling, multi-year project on the property where I typically work. We've had a contractor on site for the past three weeks, and he and his crew have become a fixture on the property. They typically clear off around 5PM on weekdays, before I am scheduled to work.

Last Wednesday, while conducting my first inspection tour of the night, I was greeted by my dear feline co-worker Fred, who wasn't in the building in which he typically works as a mouser. This was atypical, but I merely let him into the building after finishing my walkabout in his company. The next day, I got the full story... Fred had fallen asleep in the contractor's van, and woke up when the contractor pulled into his yard and was greeted with a meow. He had to return Fred to the site, but couldn't get him into his assigned building.

The general consensus at work is that this never would have happened to Ginger, because she usually demands attention and would have made her presence known as soon as the contractor entered the van. It's the quiet ones you've gotta watch. 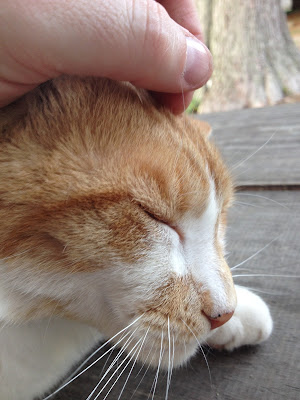 He's such a good cat, we're lucky the contractor didn't decide to keep him... I guess he figures he'll be on the job for a good, long time, so he'll enjoy the cats' company for many weeks.

Congrats on your journey, Fred.

At the very least, he could have sent a postcard.