I like to get to work early, typically fifteen to thirty minutes early, in order to have a briefing with the co-worker(s) who are working the previous shift. I like my co-workers, so it's a pleasant recap of the day's events, a time to discuss upcoming scheduling, and an opportunity to engage in chit-chat.

Last night, during the shift change, I was talking with my co-worker, who is even bigger than me, when a raccoon climbs onto a stone wall in front of our Visitor's Center, about six feet from where we're standing. After the initial, 'WHOA' and a brief mention of the 'r-word', we calm down and notice that the animal is not acting in an unusual manner, besides its boldness. The raccoon, which had a slightly spindly adolescent look, stopped, stretched out its neck, and gave a couple of inquisitive sniffs. I almost had an impulse to extend my finger as I'd do with a curious cat, but thought better of it. After a couple of sniffs, the raccoon decided we weren't anything to be concerned about, and jumped into the trash barrel not four feet from us. After listening to the raccoon rummaging around in the trash for about thirty seconds, my co-worker kicked the barrel as if to signal, "Hey, get out of there, you." The raccoon simply stuck its head out of the barrel as if to respond, "Hey, mister, I'm not done here." We both got photographs of the fearless furball: 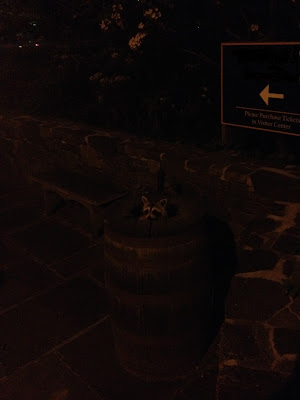 The raccoon simply looked at us, then dove right back into the trash. We were beaten, we weren't going to do more to convince that raccoon to leave. When it was done, it merely ambled off to continue its rounds. The whole incident was rather comical, especially the bit when the raccoon stuck out its nose to 'check us out'... I almost succumbed to reacting to this gesture as I'd react to a friendly dog or cat. If this young raccoon continues to be so bold, it's going to be a long summer, especially for the grounds personnel who have to clean up the area in the morning.

Look on the bright side: You could coax it to sit on your head and then get tourists to pay to have their photo taken with 'Davy Crockett'.

Wow. It's funny, but when I want to take a picture of beasts like this, they all act like they're movie stars and I'm a detested paparazzi.
~

Held out my finger to a squirrel like that once, & got a good nip for it.