The local library branch had a major book sale today, and paperbacks were priced at twenty-five cents apiece. There I was, cheerfully browsing, when my heart started to race, my hands started trembling in barely concealed excitement: 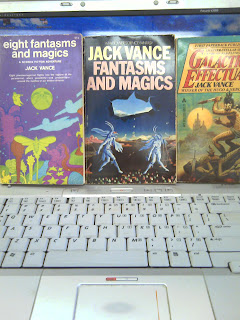 The war party from Faide Keep moved eastward across the downs: a column of a hundred armored knights, five hundred foot soldiers, a train of wagons. In the lead rode Lord Faide, a tall man in his early maturity, spare and catlike, with a sallow dyspeptic face. He sat in the ancestral car of the Faides, a boat-shaped vehicle floating two feet above the moss, and carried, in addition to his sword and dagger, his ancestral side weapons.

An hour before sunset, a pair of scouts came racing back to the column, their club-headed horses loping like dogs. Lord Faide braked the motion of his car. Behind him, the Faide kinsmen, the lesser knights, and the leather-capped foot soldiers halted; to the rear the baggage train and the high-wheeled wagons of the jinxmen creaked to a stop.

The Miracle Workers may be Jack Vance's greatest work, it is certainly one of his most accessible. Although I love Vance's characteristic purple prose, he maintains a more subdued tone in this novella, a more spare and catlike prose, so to speak. The protagonist is also one of Vance's most felicitous characters, rather than a handsome, hypercompetent superman, we are presented with a "thick-set youth with a round florid face, overhung with a rather untidy mass of straw-colored hair" who is characterized by another character as "innocent and a trifle addled". No Mary Sue here, but a comical, sympathetic lead. As in many of Vance's works, The Miracle Workers is set in a stagnant, overly-conservative society faced with the need to change dramatically or face collapse. It's a theme that Vance explores in many of his works, and Vance does so rather succinctly, and extremely engagingly in The Miracle Workers.

You will not drive up your traffic by envy-arousing posts about cheap Vance books and free beer, sir. If it were that easy we'd all be doing it (V DKW'sM R).

Next thing you know, S.C. (H.B.) will sic Mrs. Kat on your gleeful behind.

Mrs Cat is under AK's nominal control. Here at Maison d'Etre we have Mrs Skat, who is considerably larger and fluffier but no less psychotic.

You will not drive up your traffic by envy-arousing posts about cheap Vance books and free beer, sir.

How about envy-arousing pictures of the glossy, glabrous globe that is my head?

Don't cha wish your girlfriend was bald like me? (note, linked video best appreciated with sound turned off)

You can leave the sound on for this one.
~