The Fish Thing at Work

Tonight being Christmas Eve, I will be throwing together the traditional 'fish thing', known officially as La Vigilia, on the job.  While, after Italian-Americans achieved a measure of prosperity, La Vigilia usually means a feast of seven, or twelve, or however many fish and seafood courses, it traditionally just involves abstaining from the consumption of red meat and poultry.  I'm not the kind of person who would tell anyone else how to be Italian, so if you want to eat a bowl of Lucky Charms, or a slice of pizza margherita, or an entire 'sharing size' bag of almond M&Ms (glances furtively into wastebasket), that's your prerogative.  I have a friend who doesn't like seafood, so she typically eats eggplant parmigiana as her Vigilia main event.  Another friend, the son of Calabrian immigrants, is, to his great sorrow, allergic to shellfish (we used to joke about him chowing down on shrimp while taking shots from an epipen).

For me, I am throwing together some seafood, using the hotplate and toaster oven at work.  I already ate an eighth course, a can of smoked clams, on crackers, so I will cook up the remaining seven seafood products (as a joke, I decided on using shells in my pasta course) in a bit.  Here's a precursor shot, similar to what will be my mise en place in a half-hour or so: 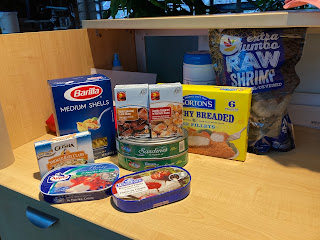 Note the complete absence of Goya products, prominently featured in previous years... no way am I lining the pockets of such an obsequious Trumper ever again.  That's a lot of seafood for just one man, but I figure I'll be eating this stuff (particularly the shrimp) for days... I might try my hand at making an approximation of a moqueca.

In honor of the holiday, I bought Ginger a can of fishy catfood: 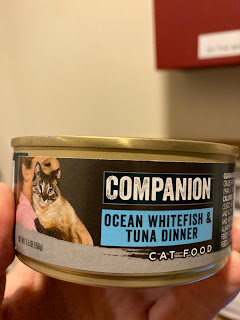 Now, before you chastise me for imposing my culture on the cat, I have to say in my defense that she imposes her culture on me every time she sticks her butthole in my face.

Alright, people, enjoy your Christmas Eve.  I've got some cooking to do.

Seafood is traditional for Xmas lunch here. Unfortunately, so is food poisoning because of the weather combined with the seafood :)

It's Xmas here already so I'll wish you a good one, and that you and all those you love (especially Ginger) stay healthy and safe.

Happy holidays to you and yours and thanks for the education on Italian traditions.

Thanks, and Buon Natale.

Happy holidays to you, Ginger, and all who you care for! Enjoy the days.

Thanks, doing a family Zoom now.

I didn't note the absence of Goya products because they were just normal until recently.

But when Papi went international to tell the world that he will clean trump shoes with his tongue,

That is when i decided to try other brands.