Today has been one of those flawless September days which characterize late summer in the New York City metro area.  It began early for me, with my volunteer judo coaching gig.  With social distancing rules still in effect, we were able to teach some facsimile of the sport, using elastic resistance bands for uchikomi and improvising grappling dummies from the padding used to wrap the goalposts of the soccer field we are using for the athletic program.  Sensei stressed the importance of discipline in the sport, and enumerated the values he expected as part of the disciplined regimen: respect, politeness, kindness, and good listening skills.  It might seem odd to stress kindness in a combat sport, but there is a moral component- one simply does not want any crumb-bums in one's dojo.

We taught for classes, and after shooting the breeze with my fellow coaches, I left around 12:30, and decided to run some errands before work.  The traffic was so bad, though (I imagine everybody is taking advantage of the limited number of nice weekends we can expect before it gets cold), and I ended up going to work very early.  Why sit in traffic on a local thoroughfare when one can sit in a shady spot with a friendly cat for a while?

I think I learned what my superpower is... it's a knack for arriving at a place exactly when I am needed.  Yesterday, I got to work just as one of our managers was getting ready to leave, and a sketchy guy in a sketchy pickup truck pulled into our lot.  Today, the head of our retail division came to get some stuff she needed for a fundraising event which is to take place tonight.  While her husband waiting in their car with their not-quite-two-year-old son, she came in to get some signs, and some containers, which I was able to help her lug to the car.  While she was rummaging around in the basement, she found a merchandise rack that she decided she needed.  While not terribly heavy (for a brute like myself), it was a bit bulky- I ended up taking it out of an oversized basement door and King Konged it up an exterior stairway.  Her husband and I then partially disassembled it to get it to fit in their vehicle, and they were off to the races.

Now, after a busy day, it's pretty quiet.  With the arduous tasks behind me (unless, of course, another should arise), it's time to take advantage of this now-tranquil summer evening: 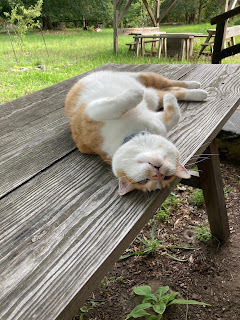 We've been work partners for eleven years now, we get along.

Ugh, the Belt is never fun. Could it have something to do with people getting home before Shabbos?