Tonight, my great and good friends at the Secret Science Club are presenting a Zoom lecture with theoretical physicist, cosmologist, and feminist theorist Dr Chanda Prescod-Weinstein of the University of New Hampshire.  Dr Prescod-Weinstein is a founder of Particles for Justice and author of The Disordered Cosmos.

Dr Prescod-Weinstein began her lecture with the story of the cosmos- the universe went through a period of inflation after the Big Bang, when spacetime expanded rapidly.  the age of the universe is approximately 14 billion years, the number changes as more data accumulates.

Evidence about the period after the Big Bang can be observed in the form of the cosmic microwave background radiation.  The CMB radiation is the coldest radiation in the universe- with an average of 2.7 degrees Kelvin and little variation.  It has been 'mapped' by the Planck space observatory: 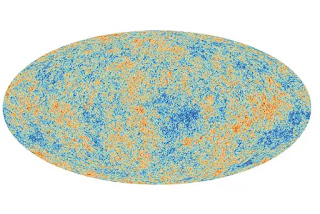 Dr Prescod-Weinstein then showed the 'first light' infrared image from the Spitzer space telescope, depicting the universe about 400 thousand years after the universe began.  In this infrared image, one can see nuclear fusion 'turn on' in stars: 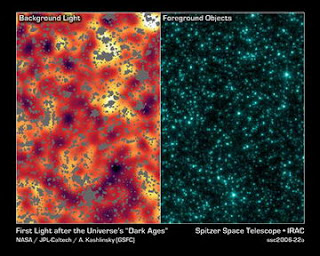 Dr Prescod-Weinstein  followed this up with an image from the Hubble deep field depicting a multitude of galaxies: 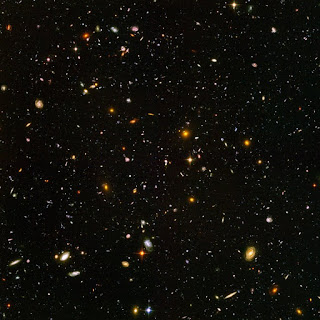 Dr Prescod-Weinstein noted that theoretical physicists attempt to piece together a coherent mathematical story of the universe.  Images are snapshots, the physicists try to find out why they look like they do.  How much information is imprinted on the photons depicted in these snapshots?

The different colors in the Planck telescope image represent tiny fluctuations which signify the seeds of structure formation... the nascent.stars, galaxies, globular clusters which ultimately form  the seeds of the beginning of us, since we are also structures formed in the universe.

The Planck image represents a degree of homogeneity, the composition of the universe was similar, and isoptropy, the universe is uniform in all directions.  On a cosmological scales, the universe is full of galaxies, connected by filaments between.  The universe is expanding, but Dr Prescod-Weinstein didn't quite like modeling this as galaxies getting farther apart, likening the expanding universe to an inflating balloon... one wouldn't characterize the distance between dots on a balloon as empty space.  The expansion of the universe is increasing in speed, and this cosmic acceleration has come to be known as dark energy.

Most of the matter in the universe has not been observable, and dark matter has been proposed to account for this lack of observable 'standard model matter'.  In the 1970s, astronomer Vera Rubin noted that the rotational speed of the Andromeda Galaxy seemed to be wrong and proposed that dark matter at the edges of the galaxy caused the discrepancy between what she observed and what had been expected.  In the sciences, theory and observation need to be reconciled.  For a while, there was a debate over whether dark matter or a  new theory of gravity would be correct... the consensus position was to stick with dark matter.  Dr Prescod-Weinstein stated that she personally prefers the term 'invisible matter' to 'dark matter', illustrating what she meant by cupping her hands and quipping that, if she had a handful of dark matter, light would be passing through it, it wouldn't obscure vision.  As far as the term 'dark energy' is concerned, she prefers 'cosmic expansion problem' to describe this phenomenon.

Light goes through dark matter with no photon interaction.  Dark matter moves slowly.  It is not short lived.  Dark matter is nvolved in the hierarchical structure of the universe.  If dark matter interacts with standard particles, such interactions would have to be sought in particle colliders, and points of interaction could then be sought on an astronomical level.  Dr Prescod-Weinstein displayed a slide depicting possible non-gravitational interactions between dark matter and standard model particles:

In the search for dark matter, certain properties would be expected of a good candidate- such a particle should be stable, colorless/chargeless, cold, non-dissipative, and  consistent with what we see. 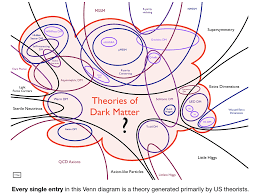 Dr Prescod-Weinstein stated that the problem probably lies beyond standard model physics.  She noted that confusion is not an obstacle for scientists: "It's our job to be confused and to work beyond our confusion.

Dr Prescod-Weinstein then shifted the topic of the lecture to the axion, a hypothetical particle the existence of which was proposed in the Peccei-Quinn mechanism to solve bad predictions stemming from the strong CP problem.  She displayed a couple of equations outlining the theoretical basis for the axion proposal, and said to ask her about the higglet in the Q&A.

The late physicist Dr Ann Nelson was a champion for axions describing them as natural and elegant, and viable- a good dark matter model  Axions would be bosons.  Bosons can be distinguished from.  fermions- when cooled, fermions go to the lowest energy quantum state possible while bosons when cooled form a condensate with same ground state act as single particle.  Such a condensate could explain fuzzy dark matter in which ultralight axions would.behave like a wave.

One possible detection method for axions would involve an nteraction with electromagnetic fields, resulting in the Primakoff effect, then scientists could look for axions astrophysically- do simulations match what we observe?

Dr Prescod-Weinstein then discussed the ssocial and human side to science.  She is the first black American woman who on a tenure track in theoretical physics.  She has been a barrier breaker throughout her career trajectory.  She noted, though, that Black people have always been involved in science, citing Onesimus, a man enslaved in Cotton Mather's household, who demonstrated how to prevent smallpox with a form of inoculation.

There has always been a Black tradition of science.  Why do race and gender matter?  Social phenomena shape science because universality and objectivity are different.  Physics apply everywhere, but are observers objective when it comes to grant money or the seriousness with which theories are taken?  This is about our assumptions about competence, not physics.  Social justice must also come into consideration, as in the example of indigenous Hawaiian opposition to the construction of the 30 meter telescope in Hawaii.

Dr Prescod-Weinstein ended her lecture by stating that spacetime is curved, not straight- it's not just for straight, white cis men.

The lecture was followed up with a Q&A session.  The leading question was: Why does the cosmic microwave background persist?  The universe prior to it is opaque- the photons that we see have been traveliing through spacetime for 13 billion years, and are red-shifted.  CMB was discovered twice- 1940s observation near a star revealed that space was not empty, but radiation was present.  Then two radio astronomers discovered a signal which wouldn't go away, which turned out to be the CMB.

Some Bastard in the audience took up Dr Prescod-Weinstein's challenge to ask her about the 'Higglet'.  She noted that she is AA Milne fan, and the axion was called the Higglet by Dr Steven Weinberg...    axion was the name of a laundry detergent (the proposed particle cleaned up a problem), named after a Greek orthodox liturgy.  As a Milne fan, the Good Doctor opined that Higglet would have been a more accessible name for the public.

Asked about the TV show The Big Bang Theory- the Doctor was not a fan- white men treating people poorly isn't funny.  This sort of rude behavior injures women and people of color.  The show was grotesque, and damaging to the scientific community.

Galaxy halo theory- is there dark matter outside the halos?  Where do we set the edge of such halos?  There is dark matter inside the galaxy as well, some is probably passing through your body right now.  The one thing that dark matter does have in common with standard model particle matter is interactivity with gravity.

Which experiments have the best potential to find dark matter?  Dr Prescod-Weinstein joked that it's a religious question...She personally loves the Bose-Einstein condensates formed by axions, and noted that she started working on axions because it was an available topic and she became known as a global expert on the topic.  She noted that people working at the Large Hadron Collider searching for supersymmetry started working on axions when they didn't find evidence of supersymmetry.

Asked about future research, she informed us that one of her research topics now is the soft interactions of axions.  She would be happy about anything that pushes cosmology beyond the standard model.

Once again, the Secret Science Club team has presented a fantastic lecture.  Kudos to Dr Prescod-Weinstein, and Margaret and Dorian.  For a taste of that SSC experience, here is a lengthy discussion by the Doctor regarding The Disordered Cosmos:

Pour yourself a nice beverage and soak in that SCIENCE!!!