A Handsome Boy With a Fancy Haircut

I haven't posted about my upstairs neighbor George in a while, but he's looking pretty dapper these days.  He's got a new spring look, which is a change from his shaggier winter hairdo.  Here's the 'before' picture of my friend, pondering the destruction of a soccer ball: 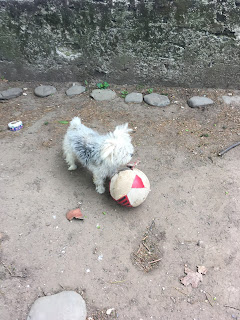 He's sporting a sleek new look, as seen in this picture of him taunting me by refusing to hand over a squeaky toy that he loves to 'fetch', and maul (he's a terrier, so he's tenacious when he bites something): 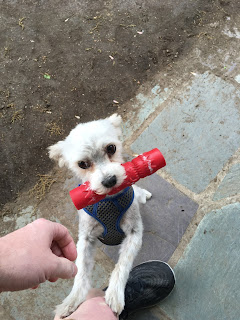 The tail says 'let's play', while the skeptical look on his face says, 'just you try to get this thing'.  Uhh, buddy-boy, I can't throw it for you if you don't relinquish it!

Lately, he's been kicking up a fuss on those days when I come home from work at 7AM.  While everybody in his household is up, getting ready for work, school, or athletic endeavors, he knows that there's someone who's done for the day, and has time to goof around with him.  He hears me, and starts barking, and my neighbor lets him out into the yard for some recreational time.  It's become a fun post-work routine, goofing off with a comical little guy who's affectionate, but with a slight grumpy streak (I did mention he's a terrier).

Terriers play by their own rules. They are on the original Calvinball pro-team.

He's a hoot, but as TG notes, he plays by his own rules... he's the cock of the walk, but I'm content to play his straight man.