When Your Token Black Friend Turns Out to Be a Hotep

I would love to know who was in charge of vetting CPAC speakers, but this year's roster is a doozy.  The prize for whackaloonery goes to an individual calling himself 'Young Pharaoh', who has, as a lot of whackos do, opinions about 'THE J00Z':

This week's CPAC is featuring a speaker named Young Pharaoh. In the past year, he's claimed that: 1) Judaism is a “complete lie”; 2) Jewish people are "thieving"; 3) and “all the censorship & pedophilia on social media is being done by Israeli Jews.” https://t.co/km1UFzl1IQ

The delicious irony here is that Young Pharaoh's problematic content was brought to light by Media Matters for America, long considered a bugbear by the Right. To make matters even funnier, the theme of the conference this year is 'Uncancel America', yet Young Pharaoh was instantly 'canceled' when his outlandish views came to light. Those views are a doozy! 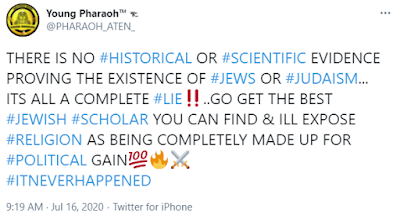 Yeah, this guy believes that there is no historical or scientific evidence for the existence of Jewish people. I'm thinking of running a Schrödinger's Jew experiment to prove the existence of Jews... I can lock a Jewish-presenting guy from the Lower East Side in an opaque box with a bag of Lender's frozen bagels. This individual's Jewishness won't be determinable until the box is opened and we can observe whether or not he plotzed because of substandard bagels.

Young Pharaoh also believes in the QAnon conspiracy mega-theory and it's assorted suite of outré tenets. You, dear readers, are lucky that I have been unable to find his song about Jews eating babies, and no, I am not making that up. This is what happens when your token black friend is a hotep, a member of a subculture of Afrocentric men who tend to be extremely misogynistic, antisemitic, and homophobic... believers in Black Liberation, but Women's Subjugation. They tend to be right-wingers, and the white right is so vested in trying to paint Democrats as 'the real racists' that they are willing to embrace these whackjobs, until they are exposed as loons by liberal watchdog groups.

No,thanks. We have crazy people working all over the world just trying to keep us going. It is disappointing to hear this young man point of view. He certainly shames himself.

What really made me plotz from all this was finding out these guys are known as Hoteps.

It is disappointing to hear this young man point of view. He certainly shames himself.

What really made me plotz from all this was finding out these guys are known as Hoteps.

They seem more Bubba than Hotep.

I was looking for a Tweet which embedded his antisemitic song, but couldn't find it... I found his Soundcloud page, but feel no compulsion to link it. It's easily found, if you are masochistic.

perhaps this is a case of turds rolling down hill. some people MUST have some group that is less than them. makes them feel superior

Some of your best.

I wonder who wrote The Old Testament?

Not that I put any stock in The Old (or New) Testament, but that a piece of writing with an awfully long tail.

Perhaps it was the Freemasons. Those guys run EVERYTHING.

I apologize, I forgot to put in this weirdo's post about how the COVID-19 vaccine will alter the 'extraterrestrial DNA' of persons of African descent. This guy is a weird mix of Sun Ra and the author of 'the Protocols'.