The Flight of the Girls

The Irish are a diaspora people... for centuries, they have fled war, famine, poverty, and oppression, both foreign and domestic. They have faced exile and penal transportation. My dad's mom's parents were members of the diaspora- fleeing poverty in the early twentieth century (my great-grandfather had planned to emigrate to Australia, but while he was in San Francisco waiting to embark, the earthquake hit and he, a stonemason, was pressed into service rebuilding the city, actually living in a labor camp but receiving a decent wage, and decided to go back to New York, where he met my great-grandmother). I live in a neighborhood with a large Irish immigrant community, and every summer, we get an influx of young people from Ireland looking to work in construction or the restaurant/bar industry. My upstairs neighbor is an Irish gal raising two wonderful Yankee kids, and my next-door neighbors are Irish. Going to the bank, I overhear guys in paint-spattered pants asking how the craic is. I go to the local butcher to get house-made black pudding. The diaspora continues, though now there is more of a back-and-forth.

One of the watershed moments of the Irish diaspora was the Flight of the Earls, which saw the earls of Tyrone and Tyrconnell leaving Ulster to seek help from the Spanish government in an attempt to throw off British sovereignty. The Flight of the Earls looms large in Irish folk history.

This weekend, though, saw a return of the diaspora population as many Irish abroad returned to Eire in order to vote on the repeal of the Eighth Amendment. Looking at the pictures of returning émigrées, I have to say that the Flight of the Girls is an even more important event in Irish history as the Flight of the Earls (Smut Clyde informed me that this picture was actually taken at a pro "return to vote" performance art piece): 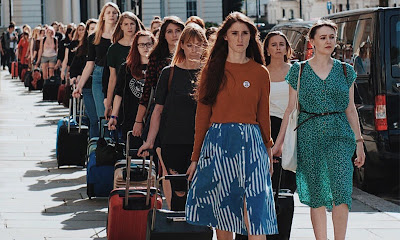 As an aside, I totally want to buy the girl in the glasses and the Ramones T-shirt a shot of Tullamore Dew. Gabba Gabba na Gael!

The Irish people voted overwhelmingly to repeal the Eight Amendment which criminalized abortion. Once again, the population of Ireland has voted overwhelmingly to pursue liberal reforms- the first being the legalization of same-sex marriage. I have a prediction that this liberal vote, in the overwhelmingly Catholic Republic of Ireland, will cause a lot of angst among the right-wingers here in the United States. The Catholic Church in Ireland has been guilty of running a gulag system for young women, complete with forced labor and mass graves- they had lost the moral authority to weigh in on the abortion issue. A lot of Americans view Ireland as some sort of Candyland, toora loora lorra and all that shit. They want Ireland to be trapped in amber, a faraway land inhabited by leprechauns or smurfs. The voters of Ireland, and the emigrant Irish community proved to the world that they are modern, progressive people, people devoted to women's and minority rights.

This being a post about matters Irish, I would be remiss if I didn't post a song... the most appropriate one for this occasion is the haunting The Innocent and the Honest Ones by In Tua Nua:

That song was released thirty years ago- the Tuath na Gael have come a long way in the intervening years.

Posted by Big Bad Bald Bastard at 4:00 AM

Looking at the pictures of returning emigres,

In that particular case, an image of an art performance event encouraging people to return to vote.
https://londonirisharc.com/repeal-london/2018/1/31/home-to-vote-a-referendum-is-on-the-way-and-ireland-needs-you-8tfwm

That song was released thirty years ago

The 8th Amendment itself was only 35 years old (a response of Irish theocrats to Roe vs. Wade in the US.)

Thanks for the correction there, old chum.

Good for Ireland. Not so much under the thumb of the Vatican as people say, I guess... I wonder what would happen if we voted on abortion in the States.

I don’t think that would ever happen. The Republicans know the deck is stacked in their favor, politically, and a plebescite would bury them.

I dunno about that. I fully agree - and have long written - that the LAST thing the Republican party wants is to actually WIN that fight. But the courts are where Trump is making real 'progress' toward rolling back the clock on civil and human rights. Just as the GOP never thought that their tactics would lead to something like Trump, they never thought they might actually get their way on abortion.

If they do 'win', it will serve merely to create a patchwork of 50 different state-level abortion laws. And if that used to seem unthinkable, it's exactly what we've ended up with in the healthcare war.

It's quite weird, but just as same sex marriage rights started with local politicians (Gavin Newsome in SF) and moved to the states before finally forcing the Federal government to make a decision, abortion rights could go in exactly the opposite direction.

The good news is there will ALWAYS be states where abortion is legal. The not-so-good news is we can certainly imagine states where it is not. It WILL be interesting to see - if that happens - the enforcement and penalty mechanisms they choose...

Yeah, if they win the abortion fight, they lose the wedge issue... better to keep the base riled up!