Last weekend, there was a spot of drama amidst our re-opening for the season... a raccoon which was active during the daylight hours. When you see a raccoon walking around by daylight, it's typical to err on the side of "OMG, RABIES!!!!" Accordingly, on Friday afternoon, the Manager on Duty called the local gendarmes to report this potential hazard to the public health... to compound matters, a coyote recently attacked two children not too far from the site. I arrived on the job before the police arrived, and the raccoon was curled up on top of the sewer grate: 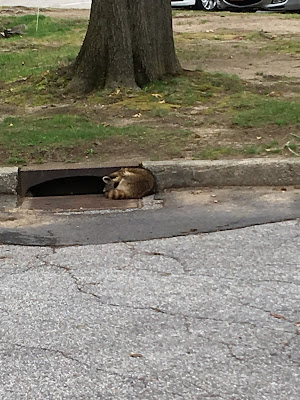 I stood in the vicinity for the rest of the afternoon and waved people away from the area until a police officer arrived. The village doesn't have a dedicated animal control officer, so there was no prospect of trapping the animal. The one time I had witnessed the putting down of a possibly rabid animal took place along the Bronx River Greenway, which falls under County Police jurisdiction- the county sent an officer with a tranquilizer gun, and they shot the raccoon with a dart with a lethal sedative dose. The procedure among the local police is to use a 9mm round loaded with shot, instead of a bullet, to kill an animal. After a brief discussion, we decided that it would be inappropriate to engage in any gunplay until after everyone but myself had cleared the property- it's not good to shoot when people and cars are in the parking lot, and I didn't want to subject nice tourists from France or Japan to see a particularly cute, and exotic, critter being executed, even if for the public good. Luckily, the raccoon climbed back down into the sewer, and I grabbed a couple of benches and used them to block off egress. The responding officer and I then made the plan to have him return after hours so we could deal with the beast.

At dusk, I unblocked the sewer grate and peered into the sewer... not exactly fun. After about twenty minutes, the creature emerged from the sewer and I called the non-emergency number of the police- they were on another call. By the time the original responding officer returned, the raccoon had gone back underground, so we weren't able to resolve the issue.

After the police officer left, I went to my office and texted my boss about the inability to resolve the issue, then sent out a memorandum to all of the MODs for the weekend, plus several other managers. As luck would have it, the raccoon never made an appearance on Saturday afternoon, so I am hoping that it expired in peace. Better yet, I hope it recovered, because, as much as the local raccoons are a pain in the ass, I'd be lying if I said I didn't like the suckers.

That's not very typical behavior for a rabid raccoon! It probably was dying of something else. Requiescat in pace, Mr. Raccoon.

My father was once attacked by a rabid raccoon at work (he worked as an above-ground supervisor at a local coal mine), and he had to kill it with a snow shovel. When his coworkers saw him walking across the lot holding the bloody shovel, they all scattered and hid because they thought he'd finally snapped and had commenced a killing spree. He had to have rabies shots and all, but was fine. He only had some minor scratching on his ankle where it had shredded his jeans and the top of his boot.

I once had to shoot a rabid raccoon myself! I was home alone, and it jerkily walked right by the back door. I debated with myself over whether or not I would have to deal with it (I am a pussy), but in the end I decided to be an unsung superhero. I have horrifically bad eyesight, so I had to get much closer to it than is recommended. It didn't try to attack me, but it was whimpering and snarling and twitching and clearly suffering. I ran in the house crying afterward & when he got home my father and one of his friends burnt, limed, and disposed of the body. Bad memory.

Those are the only two encounters with rabid raccoons I can give personal accounts of, but my dad shoots a rabid groundhog at least once a summer. THE JOYS OF RURAL LIFE.

If I recall correctly, the rabid ones act drunk. Those are a couple of great stories, especially the one of you shooting the raccoon with bad, bad eyesight.

If I recall correctly, the rabid ones act drunk.
Yes. And they walk like they're pop & locking. The foaming doesn't happen until near the end. It's all quite horrible, actually.

especially the one of you shooting the raccoon with bad, bad eyesight
I've found that my visual disabilities don't have any impact whatever on my aim. It's like a circus trick, with which I amaze all comers. I would like to say, "I do not shoot with my hand; she who shoots with her hand has forgotten the face of her father. I shoot with my mind." But probably it's just that I've been shooting guns since I was a tiny child and retain some kind of muscle memory that governs the act.

Stay safe in your woodland perambulations. Early May is not a good time to encounter diseased animals of any kind, suffering from any variety of sickness — especially that near civilization. If you or anyone you know has mammalian pets, now would be a good time to be sure they're up-to-date on their shots.

Took a while to figure out this was King. At first, I thought it was a quote from Dune.