Just Sit Tight Until It's Done

Yesterday was the infamous bomb cyclone's pounding of the Northeastern coastal regions. Under normal conditions, I would have gotten off of work at 7AM, but the radio traffic reports were so heinous that I decided to 'shelter in place'. It was a good thing, too- the governor declared a state of emergency, telling all non-essential drivers to stay off the roads. Also, several of my part-timers had obligations at their other jobs, pretty much doing the same thing I was doing.

The storm itself was pretty brutal, with high winds and an accumulation of 6-8 inches of snow, creating the 'whiteout conditions' that inspired the song I took this post title from:

I actually had to 'batten down the hatches' at one of our onsite buildings due to the windy conditions. The damage onsite was minimal, an outside screen door of one of our buildings was ripped off of its hinges, but nothing major transpired. This morning, I'm just waiting until rush hour dies down before hitting the road. It's currently 7F (-14 C), but feels like -11 with the wind chill. The site looks gorgeous, but being outside in all that beauty just isn't pleasant: 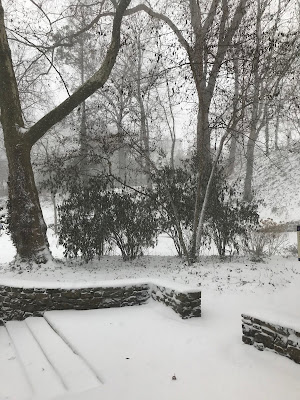 The wind has blown the snow into pretty, intricate patterns: 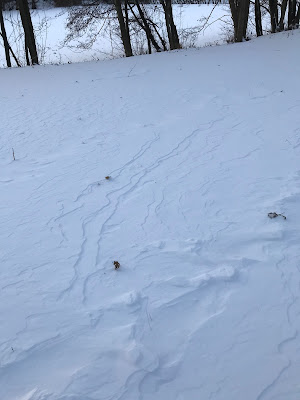 The day crew has begun to filter in, so I'm just sitting at my desk drinking a cup of coffee before hitting the road. I have a bit of a crappy ulterior motive for taking my sweet time before heading out... I figure that some poor working stiff with a conventional job schedule will have left me a parking spot on the street. Yeah, it's kind of a dick move, but my car was off the street for the past 36 hours, giving the snow removal crews some additional room to maneuver when it was needed.

Posted by Big Bad Bald Bastard at 9:25 AM