Today, something which I never would have believed thirty years ago happened... Shane MacGowan turned sixty years of age. My love for Shane has been documented over the years, I just didn't think that this hard-drinking, hard-drugging, hard-living rapscallion would live to be eligible for a senior citizens' discount. Here's a guy who's public debut was a journalist-documented earlobe biting at a Clash show: 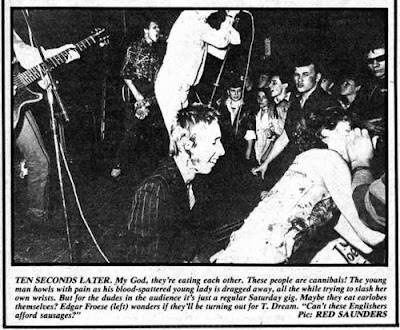 Who would have thought that that bloody kid would survive decades of self-abuse to become a beloved elder statesman? While I am a huge Pogues fan, I figure it would be fun to post a video of a song by Shane's first band, The Nipple Erectors- here's King of the Bop:

A cute number, but perhaps not indicative of the man's glorious songwriting skills. A few years later, the guy was writing epics such as The Sickbed of Cuchulainn:

It looks like Shane had a blast on his birthday, but I'd be remiss if I didn't add (as everyone does) that I'll always be shocked that he outlived Kirsty.

Not getting run over by a speedboat tends to help out in the survival sweepstakes.

I adopted a baby monkey after I found him on the side of the road next to his mother's lifeless body. The baby didn't know what to do and was sad and crying so I decided to take him with me and help raise him. So I decided to daily post a YouTube video of our baby monkey so everyone can see him. Here's my YouTube channel: https://www.youtube.com/channel/UCYm1jZ-9CFQD1inehrhYcIg