Today was a glorious day- the temperature was above the freezing point and the sky was a flawless, cloudless blue. Having felt cabin fever for weeks and needing a break from politics and current events, I decided to make my annual winter eagle-watching pilgrimage. I headed straight for Fleischmann's Pier in Buchanan, New York (immediately north of the Indian Point nuclear reactor). Fleischmann's Pier is the best eagle-watching spot that I know, and I was not disappointed today, spotting a half-dozen eagles in the vicinity.

When I arrived at the pier, there was a brisk wind blowing down the Bear Mountain gap, a fresh, cold breeze seemingly coming down from the Adirondack Mountains, up by the Canadian border. Looking north, I could espy the Bear Mountain Bridge, framed by the high walls of the Hudson Highlands, which define the fjord known as the Lower Hudson Valley: 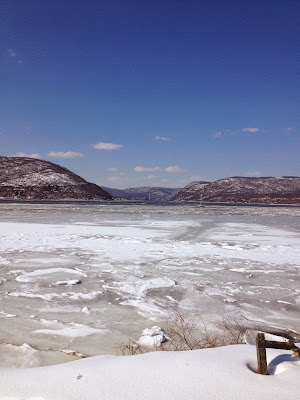 I had the pleasure of seeing two adult eagles conducting an aerial dance, which my phone camera was unable to capture in its glory. I was able to click a bunch of sadly inadequate photos of the birds: 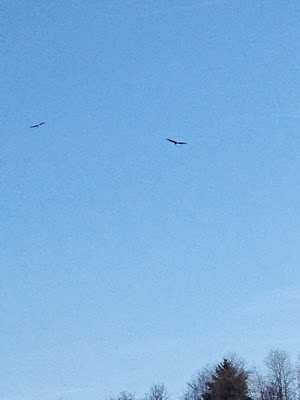 Best of all, a juvenile eagle, it's plumage a patchwork of grey and black feathers, soared about thirty or forty feet overhead, a glorious site that, alas, my phone camera was unable to capture in its sheer grandeur: 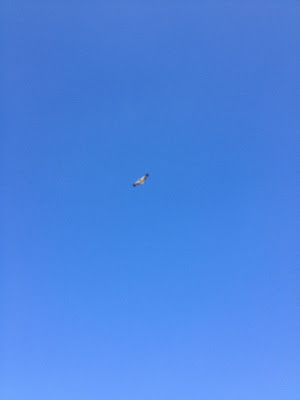 It was a wonderful way to spend a few hours on a brisk but beautiful afternoon. It's heartening to know that the eagles of New York are thriving, especially in light of a bacterial infection that is plaguing the South's eagle population. I certainly hope that the eagle-killing bacterium can be combated, it would be tragic to lose these imposing creatures after they've come back from the brink of extinction already.

Around here about this time of year eagles descend into the valley and start munching on the baby lambs that are all over the fields. It's rather macabre to see the moms just sorta hanging around watching their kids get gobbled by a dinosaur. Sometimes the sheep fight back though, so there's that.

We have some local celebrities that have their own web cam. Unfortunately, one of the two eaglets did not survive this year but we still have one who is strong and developing nicely. He should be making his first flights any day now.
http://dickpritchettrealestate.com/eagle-feed.html#

Eileeninmd is getting great pics with a Canon SX40.

It's not as small as my G15, but the longer distance (and moon) shots are much better. And it's cheaper!
~

Days like these help to reconnect with the beauty of the world, even though so many people are doing their damnedest to convince us otherwise.