"Yeah, I heard you, that's why I came. I understand you don't have a lawyer... you're just lucky that I was up and about at this ridiculous hour to bail you out."

"Look, I know you claim to be innocent, but you were picked up on private property wearing a ridiculous burglar mask, like something from a cheesy cartoon, or a fast food commercial. It's no wonder they were suspicious when they picked you up." 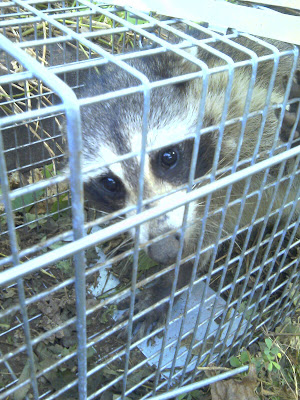 "Yeah, I know you didn't have any stolen goods on you, but you'll probably face a trespassing charge at the very least. What the hell were you doing on that property at that hour, wearing that mask?"

"What? Somebody told you there was a fancy masquerade there at that hour? Fool, remember that Cinderella had to leave the masquerade ball at midnight... those kind of parties don't start at midnight! Look, I think you were being set up... the real thief wanted you to be the patsy while he committed the crime. Judging from the items missing from the property, I immediately thought of a criminal who sorely vexed me for a long time... but he's been dead for two and a half years- unless he faked his death... but that only happens in bad movies."

"What? Never mind, you're free to go, and take off that ridiculous mask!"

Posted by Big Bad Bald Bastard at 6:13 AM

Raiders of the Full Trashcan
~

We have big powerful badgers here . No raccoons
The badgers I think are bigger than the ones you have......and more aggressive.....

And they are a protected species...

But they still kill my chickens if they get a chance

Raiders of the Full Trashcan

"Procyon Jones and the Temple of Dump"

We have big powerful badgers here . No raccoons
The badgers I think are bigger than the ones you have......and more aggressive....

The raccoons top off around twenty-five pounds, but they are fiendishly clever. They have very clever, manipulative paws with which they can open simple latches. Plus, the suckers can climb like nobody's business. When they squabble with each other, they make bloodcurdling screams.

That being said, they are very cute and comical, so it's hard to stay mad at them.

We have racoons but they never give me any grief and I enjoy watching them scuttle across streets and into their personal aquatic subway system - there are a couple of streams that flow under the streets here. Groundhogs on the other hand are Satan's lapdogs.

No. Because every heterosexual man's head would explode and we'd have to clean up the mess, that's why.

I have my own bandits....pet ferrets, but outside at night, the raccoon party DOES go on. And lately, Mama Racoons traipsing across roads with a train of babies so unendurably cute that you forget the havoc they raise at night.