Today being a gorgeous summer day, and my day off, I decided to head across town to Lenoir Preserve, on the west side of the City of Y______. Feeling ambitious, I scrambled down a steep path that connects to the Old Croton Aqueduct Trail, and walked south to Shonnard Terrace, where I turned around. On my way back north, I met a handsome fellow on the trail: 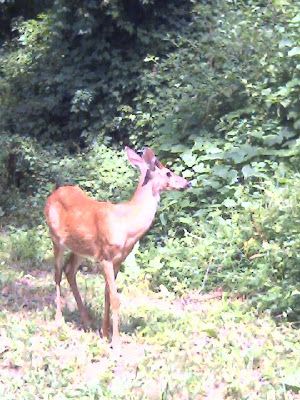 I couldn't believe how bold this young stag was. By moving very slowly, shifting my weight to one foot, then gliding the other a few inches, and making no sudden moves, I was able to get to within about six feet of him: 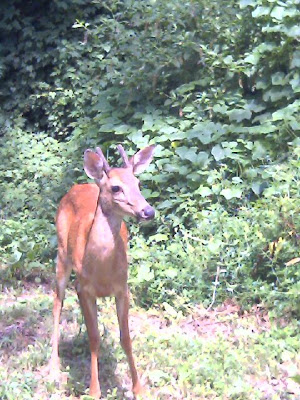 I was close enough to him to see the glistening wetness of his nose, and the tarsal glands that will serve him during his rut.

At a certain point, I decided it was time to continue north and, because the stag was so uncharacteristically bold, I didn't want to turn my back on him. He and I circled each other warily, and as soon as I picked up my pace, he trotted a short distance away to watch warily. I had never gotten so close to a live, wild deer before.

When I got to sculpted lion south of Odell Ave, I decided that I would do some "exploring", and found a precipitous "goat path" that led, after a vault to the top of a four foot retaining wall, to Untermeyer Park, which deserves a blog post of its own. The pillars you can see in the background of the picture in my linked post are at the top of the narrow, steep path. Here's a view of the Aqueduct Trail from the park: 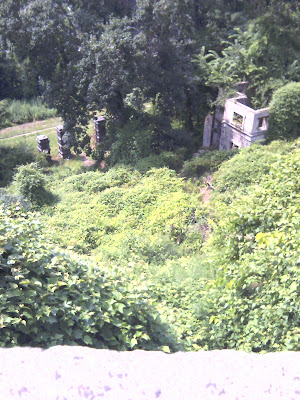 Having had enough scrambling uphill and down, I decided to walk through Untermyer Park, and its gorgeous gardens (the park gained a measure of infamy during the Son of Sam spree and resultant "Satanic Panic". The park is now known for its beautiful "Persian" gardens, and was occupied by some lovely, mainly elderly, garden aficianados. I must have made quite a contrast to them, a big, sweaty, grubby figure making his way to the exit.

A short walk up Broadway (the same Broadway that stretches from Lower Manhattan to the Canadian border) brought me back to Lenoir Preserve. The deer in the preserve were more shy than my friend from the Aqueduct Trail.

It's the coolest thing in the world when it happens, that moment when time seems to stop and somehow there's a truce built on curiosity and some kind of low-level understanding.

In Yosemite, the animals have been protected for so long, and have over so many generations grown so familiar with the loud two-legged mammals that you can have a lot of those experiences.

Some years ago, I was walking alone from Lembert to Fairview in the saddle between Tuolumne Meadows and Cathedral Peak. I came out of the trees into a wide grassy clearing at the same time an adult doe Mule Deer came out of the trees on the other side. We looked at each other, and kind of edged closer. Finally I stopped, and she thought about it for a minute, then walked right up to me. She actually ate a tuft of grass right between my feet.

Now Mulies are no-foolin' BIG ASS deer. She stood just about as tall as me, and outweighed me by at least a hundred pounds. But I just 'knew' that she wasn't going to try to hurt me. We communed there in the high country silence on a cool, sunny afternoon for a while, then we went on our way. It's a memory I've always cherished. Thanks for dredging it up again...

That's exactly what this feller did.

Is this a knock at my personal appearance?

That is SO cool! When I was young, I spent many of my summer up in Northern Ontario. Once, I was sitting by a river and out of the forest, came a Moose. Big Mother too! I just sat still and watched him as he took a drink.
It wasn't long before he caught my scent and took off. Very cool though...

Wow Bad, very cool. I once visited a cemetery and I happened upon a doe and two baby fawns. It is a cool experience just bumping into wildlife. Yesterday I was in Brendan Byrne State Forest. All I got were deer ticks. Lol

The deer on the golf courses will let you get close, as they are blase about people.
~

Many urban wild animals seem to be losing their fear of bipeds. Deer in our area are like Honey Badger, but I'm still wary of them and avoid sharing space with any deer during mating season. I don't even want to see a buck during that period because they don't want to see me, and they're bigger.

When we go camping or hiking in areas where hunting is permitted we're frequently startled by deer alarm displays ("sneezing," stomping or just leaping up and running away) because we've forgotten that's how normal deer behave.

I wish the deer that occasionally vault my fence to eat my garden would be MORE shy! But yes, meeting them on their ground is very good times.

Thirty five years ago, we stopped on a road trip through Colorado.....to observe deer at roadside. Before we knew it, one had stuck her head through the car window! After we alarmedly climbed out the other side of the car, thinking they would quickly run off; imagine our surprise when two of them walked right up to me, interested in my on-the-road-lunch still in my hands!

that is pretty neat...you know what else is neat? this here...

They also have bad-tasting branes. And their mother dresses them funny.

Venison sausage or steaks are great, though!

They also have bad-tasting branes.

Have been eating a lot of elk pie here in Tallinn. Probably a high brane content.

Cool encounter~ Pretty sure I wont be seeing any wild deer here.