I am notoriously lazy about tagging my posts... I've never done it. If I did, though, I'd probably have a "making zrm jealous" tag. Well, this would be one of those posts.

On Wednesday night, I rode the 4 train down to Grand Central Terminal, and hoofed it to Connolly's pub on 45th St for a benefit sponsored by the Irish-Mexican Alliance to raise funds for the Committee to Protect Journalists' efforts to grant asylum to Mexican journalists targeted by narco gangs. 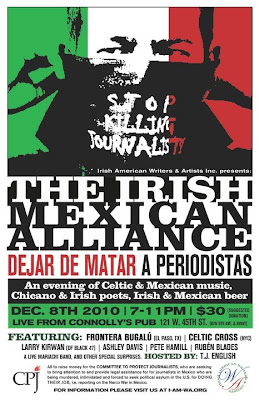 Journalistic legend and quintessential New York City "man of letters" Pete Hamill spoke about his love of Mexico, which was cemented by a five day stint in jail after a drunken bender. While in jail, he was fed by the families of the other jailbirds (including a bus driver who had crashed his vehicle), and generally made to feel at home in a bad situation. He noted the generosity and hospitality of the Mexican people, and his abiding appreciation of their culture.

Panamanian-born international salsa superstar, actor, and politician Rubén Blades (I had the honor to shake his hand and have a brief word with him) spoke about how, as a law school graduate in Panama, he decided to emigrate to the United States rather than to work as an attorney under a military dictatorship (contrast his career- a young lawyer refusing to work under a military dictatorship, and becoming an internationally beloved musician and actor, with that of John Yoo, who worked under a "democratically elected" regime writing justifications for torture, and ended up as a cloistered "think tank" flack writing self-loathing filled diatribes against "elitism"). Hell, I sure as shit wouldn't shake Yoo's hand. Mr Blades recalled his start in the mailroom of Fania Records which led to his career as a songwriter and musician, and gave a stirring account of performing his politically-charged music in venues in the Argentine and Uruguayan dictatorships, and learning afterward that the silent response from the crowd was inspired by respect, not fear.

Host T.J. English gave a brief, blistering talk on the realities on the border, and indicated that he has an upcoming article on the subject of violence against journalists in the February 2011 issue of Playboy- if you want to use the old "I buy it for the articles" line, make this issue the one you purchase "for the article".

A common theme throughout the night was the connection between the Irish American experience and the Mexican American experience. The speakers evoked the St Patrick's Battalion, the Irish soldiers who, unwilling to participate in a war of aggression which brutalized a peasant population with whom they identified, deserted the United States Army during the Mexican-American War, about which Ulysses S. Grant wrote:

Generally the officers of the army were indifferent whether the annexation [of Texas] was consummated or not; but not so all of them. For myself, I was bitterly opposed to the measure, and to this day regard the war, which resulted, as one of the most unjust ever waged by a stronger against a weaker nation. It was an instance of a republic following the bad example of European monarchies, in not considering justice in their desire to acquire additional territory. Texas was originally a state belonging to the republic of Mexico. . . . An empire in territory, it had but a very sparse population, until settled by Americans who had received authority from Mexico to colonize. These colonists paid very little attention to the supreme government, and introduced slavery into the state almost from the start, though the constitution of Mexico did not, nor does it now, sanction that institution. . . . The occupation, separation and annexation were, from the inception of the movement to its final consummation, a conspiracy to acquire territory out of which slave states might be formed for the American Union.

The spoken presentations were followed by performances by waggish Joe Hurley, local favorites Celtic Cross, and, from El Paso, Texas, yet another group of young musicians who look like grad students playing a glorious "wall of sound" of Indie Latin rock (or is that Latin Indie Rock?)- the engaging Frontera Bugalú:

Frontera Bugalú got the dance floor shaking its collective ass. After the set, I told the band's frontman that the addition of a clarinet gave a hint of Middle Eastern flavor to their unmistakably "Mexican" sound- the delicious auditory equivalent of tacos al pastor. This compliment was warmly received, and I purchased their demo CD. Give them a listen, they really are great.

I also had a chance to hang out with a guy, I'll call him "Larry", who is well known on the local music and art scene. While he didn't perform, Larry served as an elder statesman of sorts. I chatted with him briefly, and asked him if he had any plans for a Midwestern tour. Sadly, he told me that, while he loves the Midwest (especially Chicago), the economics of touring weren't very favorable at the time. This sad fact should serve as an impetus for any Midwestern fans to get their arses to New York for a spell.

I have to give a special shout-out to my great and good friend J-Co, who (although he relocated to the greater Boston metro area to raise his lovely family) always seems to be up on the New York calendar of events. Thanks, J-Co, for bringing this to my attention.

All that and a squeezebox, too!
~

This sad fact should serve as an impetus for any Midwestern fans to get their arses to New York for a spell.

I feel that this is directed at certain persons.

I feel that this is directed at certain persons.

Whatever gave you that idea?