The Most Carnivorous Night EVER!!!

Last night was the fifth annual Carnivorous Nights Taxidermy Contest. Originally conceived as a one-off event, inspired by the unsettling "Rump Ape" (a simian simulacrum crafted from the rump of a white-tailed deer) and promoting the engaging Carnivorous Nights: On the Trail of the Tasmanian Tiger by Friends of the Bastard Margaret Mittelbach and Michael Crewdson. Five years later, the continuing event sold out a 300 seat venue. Holy catfish, who knew it would take off like it did? The event is a very tongue-in-cheek celebration of "Rogue Taxidermy". Being co-sponsored by the Secret Science Club (SSC goddess Dorian Devins was a judge, SSC goddess Margaret Mittelbach was MC), I attend the event out of solidarity with my people. Last night, I actually presented one of the exhibits, sent by Peter Cua, a genius of an artist from Singapore, who was unable to attend. After my traditional "Carnivorous Night" meal of a spleen sandwich, I headed down to the Bell House for the event. I had my prepared "Shaggy Dog Story" statement (approved by Peter himself), which I read after fortifying myself with two (and no more!) pints of brew:


I feel somewhat unworthy to present these specimens, which were made by Dr Peter Cua of the island nation of Singapore. Dr Cua was unable to attend this event, so you got me... a smartass presenting the work of a genius.

Dr Cua's dream to perfect the miniaturization of taxidermy specimens began with the demise of his beloved pet impala- he had wanted to mount and display it in his home, but his apartment was too small to accommodate such a large specimen, as well as his other belongings... a plight that residents of Brooklyn will no doubt understand.

Dr Cua drew inspiration from the indigenous Jivaro people of South America, and traveled to the Amazon basin to learn their methods for shrinking preserved heads for ritual purposes. While effective, the traditional methods were time consuming, and often messy. During a hiatus in his studies, he recalled a time when he mounted a prize marlin caught by a retired American astronaut living in Singapore… while he met with this client, he was served a sample of freeze-dried space ice cream. Inspiration hit- he would combine traditional Jivaro techniques and cutting-edge NASA technology to form a new field- shrinkadermy through freeze-drying.

As luck would have it , Dr Cua’s initial efforts in this new field coincided with the rise of a multi-nation space program- Dr Cua was approached by a high-ranking official in the International Space Agency, who told him that Russian cosmonauts had been prone to depression brought on by the sterile décor of the MIR space station. In an effort not to repeat this morale problem in the International Space Station, the agency wanted the interior of one of the station’s modules to resemble a rustic cabin, or hunting lodge. Of course, mounted trophies weighed too much for the launch vehicles, and would have taken up too much room in the space station. Through his genius and hard work, Dr Cua was able to shrink bear and moose heads to mount on the bulkheads of the International Space Station, thereby ushering in a new era of rustic charm in outer space. Having planned a manned space flight in 2011, the Chinese Space Agency has consulted with Dr Cua, who is currently preparing some mounted shrinkadermy specimens, so the Chinese space capsule will look like a charming Sichuan farm village, thus giving the astronauts a feeling of nostalgic warmth as they hurtle through the void, because (as Roberto Montalban so memorably said) "It is very cold in space".

Dr Cua has also expressed his desire to show gratitude to the Jivaro people for their tutelage, and is planning on building an extensive freeze-drying facility in the Amazon Basin. Because of his commitment to sustainable development and green technology, he is planning to power this facility with an array of electric eels, which are indigenous to the region.

When asked to reflect on his career, Dr Cua has only two regrets. The first is that the non-avian dinosaurs died off due to the K-T extinction event. Shrinking and mounting one of the awe-inspiring sauropods would have been the crowning achievement of the shrinkadermist’s art. His second regret is that he could not be here tonight with you.

Thank you, and without further preamble, here are the beautiful creations of Dr Cua’s art: 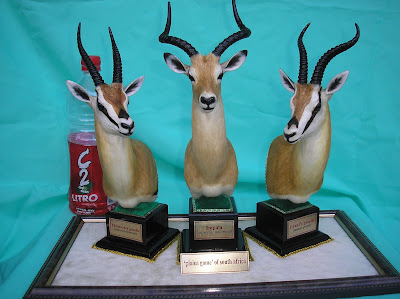 Yeah, just picture the big galumphing galoot in the masthead photo sharing a stage with such delicate, enchanting pieces- wow, I felt "ogreish", and had this dread that I'd somehow drop the display (I am not a clumsy person at all, but I always have this weird "Bull in a china shop" feeling around fragile objects).

Peter's sculptures took the "Most Intriguing" prize in the contest.

How many species were exterminated?

I think this should be disclosed.
~

How many species were eaten?
Carnivore, and all.

How many species were exterminated?

When's the last time you saw a wolpertinger in the wild?