MTG Is Not Playing With a Full Deck

Ah, Marjorie Taylor Greene (R-Cloudcuckooland)... what can we say about this QAnon obsessed freshman congresscritter?  She has come under intense scrutiny for her role in the 1/6 Capitol invasion, having amplified the 'stolen election' narrative, even stating that House Speaker Pelosi should be executed, but she's always been trash.  A decent human being does not stalk and harangue a youth whose classmates were murdered in order to push an anti-gun control agenda.

Greene has never met a conspiracy theory she doesn't like, from 9/11 trutherism to the Borg-like QAnon conspiracy complex which has assimilated other conspiracy theories in a Grand Unified Conspiracy Theory.  Perhaps the most outré conspiracy theory that Greene has pushed is straight out of the Protocols of the Elders of Cylon, an assertion that the Rothschilds and George Soros used lasers to ignite the 2018 California wildfires: 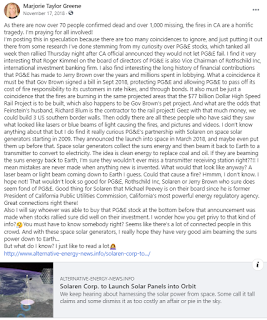 Conspiracy theories always eschew the solutions with the most parsimonious explanation, operating not on the principle of Occam's Razor, but of Jones' Gluegun... the wildfires could not have been caused by a cigarette carelessly tossed out of a moving car, or lightning, they were started by Jews in Space.  Yeah, conspiracy theories inevitably end up in antisemitic tropes, which makes them cease to be fun.

As I noted, Greene has always been trash.  It's noteworthy that she ran unopposed in the general election because her Democratic opponent dropped out of the race due to the death threats he received.  I doubt that she will be ejected from Congress, a two-thirds vote being needed to accomplish that.  Also, she's the face of the Republican party now, the culmination of decades of conspiratorial-minded lunacy begun by the John Birch Society, and spiraling downward through Bill Cooper and Alex Jones to the current 4Chan/8Chan/8Kun ecosystem of anonymous shitposters.  She'll be the House minority leader by year's end.

About the post title, I realize that Marjorie Taylor Greene is dubbed MTG on Twitter in order to save characters, but the abbreviation also smacks of an odious attempt to cast her as a right-wing 'counterpart' to AOC.  MTG is also the abbreviation for the collectible card game Magic the Gathering, wildly popular in the 1990s.  I never played it, but it sounds like a Pokémon game for the Dungeons and Dragons set... it's adjacent to my nerd interests, but not among them.  From what I've heard, victory in the game depends on some extent to the size of one's collection of cards, which causes a consumption spiral as fanatic players stack their decks with new purchases.  At any rate, the MTG of the post title clearly isn't playing with a full deck.

She's not crazy, or particularly stupid. She's incredibly adept at picking up what is popular with the people who vote GOP, and running with that. I don't think she believes more than 1% of the bullshit she spews, and she thrives on the attention and hostility she generates.

She's *dangerous* and bigoted, and increasingly a perfect representative of the Republican party as it is now.

If the Republicans didn't like her as she is, they had plenty of chances to be rid of her - and still do. But they're not making a move, and won't ever do so. She's valuable for votes.

The fact she turns moderates and independents right off, and scares off donors, isn't as important as the fact she appeals to the scary, far too powerful and well armed base, and the current crop of GOP are nothing if they aren't cowards.

We have people like her over here. They're appalling people with no merits at all. But they appeal to a certain sector our mainstream right wing party needs to attract, so they are not only tolerated, but promoted to positions of power. Revolting.

I dunno, I think she's stupid, but she does have a degree of low cunning. I still haven't figured out how I'd apportion her true belief and griftiness, percentage-wise.