In the middle of the avalanche of bad news, it's a relatively minor item, but the death of Christo Vladimirov Javacheff, the mononymous Christo, hit home. When I was in college, I remember one of my roommates ragging on Christo because of the outré, seemingly naïf, nature of his work. We were all know-it-all teenagers, and the idea of a guy Saran-wrapping a monument seemed like a scam (for the record, I still have a visceral distaste for Jackson Pollock and all his works and all his empty promises). As soon as I heard the news, I texted my old roommates, and received an impeccable response: "I guess you could call it a wrap!"

Back in January of 2005, I was self-employed, picking up contract work, with my major gig involving maintaining a warehouse of medical records from a recently closed hospital. It was a strange combination of database management, the grunt work of scaling a rolling stairway to retrieve transfile boxes, and donning a suit and going to court to drop off subpoenaed records. My co-worker was a moving-and-storage whiz, the kind of guy who could eyeball the contents of your house and estimate how much truck space and how many movers would be needed to get you to a new place for your stuff. One afternoon, I received a phone call from a friend, "Do you know how to drive a forklift?" Looking across the warehouse to the 'hi-lo' in the corner, I responded, "Yyyyyyeaaaahhhhh..." He had a job offer, driving a forklift... in Central Park... in January... at night. My co-worker gave me a quick tutorial about operating the machine, and I practiced with it every day for the rest of the week, so I would be prepared to start this night job the following Monday... after, of course, purchasing thermal undergarments at a ski shop.

Thus, I began working for Christo and Jeanne-Claude on The Gates: 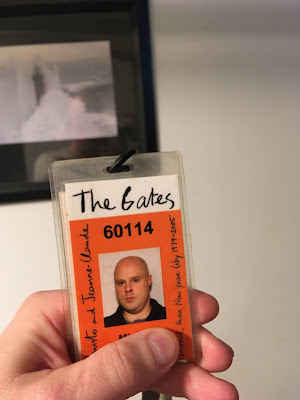 My job, a 6PM to 2AM shift, entailed unloading the heavy cast-iron bases from the flatbed trucks that would distribute them throughout the park. We would stack the bases (loaded onto the trucks by another crew) in strategic locations throughout the park for the day shift to place... forklift operators would unstack the ironmongery and pallet-jack operators would place them in their final positions.

Every night, I would take the 4 Train from Woodlawn in the Bronx to 125th St, then transfer to the 6 Train to 103rd St, not far from our base of operations. We would 'shape up' for work, find our helper/spotter, then head out in a merry convoy until we'd peel off to continue on to our designated location. If you've never driven a forklift, it's an experience- with rear-wheel steering, they are very maneuverable, you can palm the wheel and do a 360 with one. Working in Central Park at night in the cold was also an experience, I was privy to a secret world, dark but not quiet, because of the constant mechanical symphony. We would break for dinner, which was provided for us because we really couldn't split up and reconvene without causing chaos. The legendary Big Nick's was the go-to place for the project manager. We'd continue working to the wee hours of the morning, then return to our base around 100th St and knock off at 2AM.

All throughout the project, Christo and Jeanne-Claude would visit to see how we were progressing and to cheerlead. He was reserved-but-gracious, she was ebullient, ready with a joke or a hug or an offer of autographs from herself and her husband. I remember thinking how perfectly complementary they were... how difficult it would be to picture them without each other (Jeanne-Claude passed away before I started this blog, and I can't imagine how her husband must have felt). Because of their constant involvement, and infectious enthusiasm, this massive undertaking had the vibes of a family business.

As for the project itself- it transformed the normally drab Northeastern US winter landscape into a whimsical carnival, a riot of bright color amidst the typical palette of grays, browns, and washed-out greens... and then the snow came, and the whole scene was transformed once again into a creamsicle world (a joke I had made once before). People were wandering through the park, socializing and posing for photographs. The huge art installation had an auditory component as well, the sound of thousands of banners flapping in the breeze gave the site an nautical air, if one closed one's eyes for a bit. I, myself, on two occasions walked the entire length of the park, from Central Park South to 110th St, rather than take the subway, so I could bask in the wonder of it all, and on numerous occasions walked a section of the park to get a taste.

I returned for the dismantling process, stacking the ironmongery so another shift could load it onto the flatbed trucks to return to our base camp. Inexorably, the park returned to its normal winter state, stripped of its 'fancy dress'. The park that I had always loved returned to some semblance of normality, but a touch of the whimsy remained, people still reminisced about what had overtaken the park.

Yeah, it wasn't just about wrapping stuff like a deli counterperson... Christo and Jeanne-Claude forced the individuals who interacted with their grand projects to experience their normal surroundings in an entirely novel fashion. I, myself, was able to see and hear Central Park in entirely new ways, both working on the project and strolling through it. Sure, it was funny as a callow kid to goof on Christo and Jeanne-Claude's body of work , but art imparts wisdom as well as age does, and sometimes that wisdom can come in the guise of whimsy.

I was born and raised in North Marin County, California - an epicly beautiful place that over the course of the 50s, 60s and 70s attracted a diverse and ultimately incredibly wealthy population. In the 70s we were already gaining national notoriety. First, Rita Abrams wrote, and her fourth grade class performed the song "Mill Valley California" in 1970 that became a national phenomenon; then Cyra McFadden wrote the novel The Serial that was a loving but funny portrayal of the..."unusual" lifestyle growing out of the small communities of Marin.

Then, along about 1975, we started to hear about this fellow Christo, an artist, apparently, who wanted to create some kind of art installation called the 'Running Fence'. This was a 25 mile long 'fence' consisting of 18 foot tall squares of heavy white nylon. In a remarkable demonstration of both the unique nature of the time and place and the charisma of Christo himself, he was able to get permission from all the private owners and ranchers across whose land of rolling hills and gentle valleys his fence would cross. Sure, there were public hearings and a gigantic Environmental Impact Report, but no NIMBYs were successful (or even that serious) in preventing it.

Christo paid for it all out of pocket, and after a couple weeks they took it all out and left nothing behind.

Us locals were fascinated. We went up in airplanes to see the whole thing, we walked along sections, we picnicked at the end where it entered the ocean at Bodega Head.

It was a magical time in a magical place and we knew how special it (and we) were. A time of joy and beauty and LIVING that we felt, but also had it reflected back at us both by the profound sense that the running fence generated in our hearts, and by the head shaking bemusement we saw in press reports all across the country.

Christo and Jeanne-Claude were very transparent with us. They wanted us to have 'buy in', and they described their processes in some detail. The funding for their projects came from the sales of Christo's conceptual drawings and paintings.

All their work, for something so ephemeral... it really was transformative, and then it was gone.

It was a magical time in a magical place and we knew how special it (and we) were. A time of joy and beauty and LIVING that we felt, but also had it reflected back at us both by the profound sense that the running fence generated in our hearts, and by the head shaking bemusement we saw in press reports all across the country.

A lovely and even meditative piece on Christo and Jeanne-Claude and their art. Thank you. I followed their work and went to exhibits of the progress of the projects they worked on. Living in Colorado I was so excited to visit the Valley Curtain in 1972(?) But it blew down in about 12 hours if memory serves. Got to see Running Fence though. It was Earth art in the most extraordinary sense. Envious that you worked on the Central Park piece!

It really was an amazing experience, and they were lovely to work for and with.

What a wonderful experience to have had! I also thought Christo (never even knew about his wife) was just into Saran wrapping everything, and you've given me a valuable perspective on his (their) work, so, thank you.

I also thought Christo (never even knew about his wife) was just into Saran wrapping everything, and you've given me a valuable perspective on his (their) work, so, thank you.

That was my initial take on their body of work, but seeing such a huge, immersive installation changed my mind.