The Firmest Pillar of Good Government Has Toppled

Years ago, I had an investigative job which took me to various courthouses around the NY Metro Area on a somewhat regular basis (mainly to get duces tecum subpoenas for medical records 'so ordered' by a judge). I remember taking great inspiration from the inscription about the New York County Courthouse: 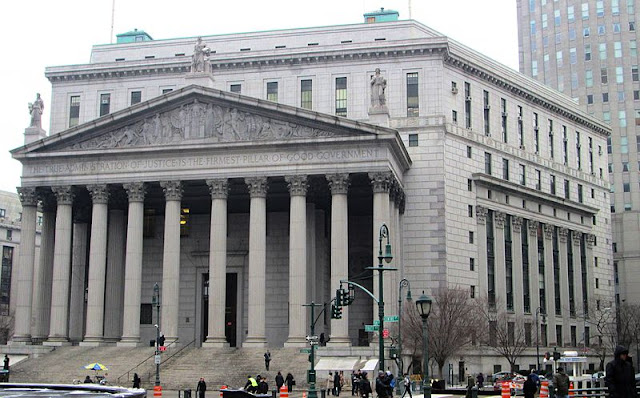 For those who don't wish to squint at the photo, it reads 'THE TRUE ADMINISTRATION OF JUSTICE IS THE FIRMEST PILLAR OF GOOD GOVERNMENT'. Words to live by, if you are interested in good government. Those who see government as an obstacle to their private gain are uninterested in the true administration of justice... so here we have over a thousand former Department of Justice employees calling on AG Barr to resign. Barr is not interested in the true administration of justice, nor in good government- he's a bagman for oligarchs, trying to garner preferential treatment for the president's cronies.

Right-wing dead-enders often talk about a 'Deep State' that is undermining the Trump administration. In reality, the people who constitute the 'Deep State' are the largely non-partisan public employees who keep things running in government agencies. These are the men and women who deplore seeing the agencies that employed them degenerate into political machines for corrupt regimes. Barr isn't going anywhere, and there really isn't a mechanism to get rid of him at this time, but it's important that his misdeeds are noted, for historic purposes. Hopefully, we'll get through this rough patch for our nation, and keeping a record of how our norms were violated is an important part of warning future citizens that the mistakes of 2016 don't get repeated.

A long time ago I read a book called "Albion's Seed" (tried to link it but Blogger won't let me!), which I can still just barely remember, which stipulated that different elements of British culture had influenced different elements of regional American culture. Among many other things that I very vaguely recall, I remember that the book suggested the Puritan-based people that settled in the Northeast had a specific formulation about what "justice" meant, and it was that all laws applied to all citizens equally. Which is not to say they didn't fuck up all the time, and weren't also evil violent racist & sexist shitbags, but that was the ideal. The English gentry who indentured servants and then created the institution of American slavery to farm and settle the South, however, had a vision of "justice" that consisted of "protecting our precious elites from facing any consequence for their actions, no matter how bad, ever." For them, it was all about maintaining the privilege of the hierarchy. I don't know if I 100% agree with that — Corey Robin said in "The Reactionary Mind" that conservatism is all about the preservation of hierarchy, no matter where it happens — but it certainly seems like we're selecting heavily for the long-dead expat English gentry in the Trump administration. I've never seen an organization so blatantly focused on hierarchy — Trump is protected by the voters beneath him, who he's fucking over as badly as any other Republican president would, because he's openly promising them that he'll make sure they won't lose their place in the hierarchy to college-educated smartasses and Spanish-speaking brown people. If we didn't have concentration camps at the southern border and hungry poor people (potentially?) missing their food stamps, it would be awe-inspiring. What a bunch of evil fucks! I hope they all stroke out at once, while watching the same Fox News show. Couldn't happen to a better cult of villains.

Also: Really, really sorry for letting your super-kind comment on my blog go unanswered for, like, a year and a half. Very bad online behavior, & I apologize.

You had bigger things to contend with, Emma, that's not bad behavior at all.