Today's shocker was Mitt Romney's vote to convict Trump in the impeachment shitshow. I never knew the guy had the spine to buck the Republican ranks. Mitt cites his religious faith as the reason for his vote, and I have to note that the Mormons do have an interest in protecting the rights of religious minorities, being members of a religious minority themselves. I also suspect that Trump's anti-immigration policies are seen as problematic by a Mormon church that sees immigrants as potential converts.

I also imagine that Romney's current act against Trump was inspired to some extent by chagrin at his former subservience to the crass, vulgar Queens lout... the political manifestation of the emotions conveyed in this picture: 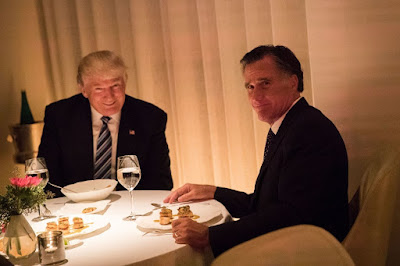 Oh, Mitt, you knew back then that you were doing something craven, at least you found your spine a few years later. I'm not ready to call Mitt's vote a 'profile in courage', it's more of a 'profile in not being utterly craven', but it's a start. He's already taking flak from Trump and his cult, and will probably be drummed out of the Republican party. I can't imagine him becoming a Democrat, but it seems a foregone conclusion that he will become an independent of some sort. If he can inspire other adherents of the LDS Church to follow suit, that would be a big blow to the Religious Right, with Mormons having an uneasy political alliance with evangelical Christians (much as conservative Roman Catholics do). I'm no Mitt fan, but if he can hasten the demise of the GOP, then I figure I could say something nice about him.

Mitt was lying. If he was really concerned about traveling the moral high ground/road, he wouldn't be a politician.

Mitt is no hero, the Republicans didn't want the vote split amount party lines. One lady voted for witness, one lady (oops, make that spineless man) voted for conviction. All part of the show.the heat will die down until next impeachment.

"Corporations are people, my friend." Mitt only appears to have a semblance of morality because the entirety of the Republican party is so obviously devoid.

Trump probably made him order something he's allergic to (he did that to Christie). And stuck him with the check.

We have fairly decent health care in Ma.and it was Romney who put it in place when he was governor of Mass.The national model everyone calls "Obama Care"is based on the one in Ma.it really should be called "Romney care"He is probably one of the few repugnantCONS that is not a vile amoral disgusting soulless ghoul