Trying to Get in from the Heat

It's been really hot for the last couple of days as the 'heat dome' which has been cooking the Midwest has moved east. The Manager on Duty on the dayshift spent a good portion of the day running jugs of cold water to the folks who had to work today, and handing out refrigerated bottles of water to visitors as soon as they arrived on site. Ginger parked herself in the air-conditioned break room until her end-of-shift meal was forthcoming and she took up rat patrol duties after 5PM. Shortly before sundown, I let her and Fred out and gave them a good brushing, releasing clouds and clouds of hair.

It's still hot out, about 80 degrees Fahrenheit (26.66 Celsius), so even the cold-blooded denizens of the site are enviously eyeing the air-conditioned interior of our main building: 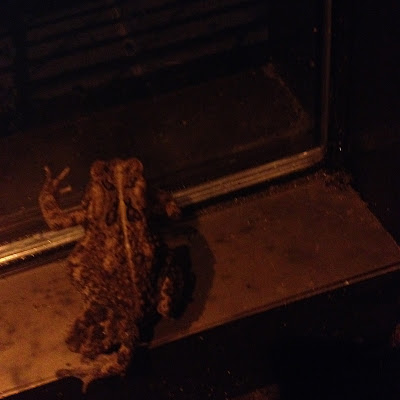 Hey, buddy, I'll let you in, but you've got to get me VIP passes to Toad's.

Awww... They really like drinking cool water through a straw.

Beware the Under Toad!
~