Back for the Weekend, Cone and All

Regular readers will recall that my coworker Ginger was on the injured reserve list, having had minor surgery to remove a cyst on her ear.  This necessitated a fitting with a cone and a period of recuperation at a manager's house.  The instructions were clear, Ginger is to remain indoors for at least another week or so, until the stitches can be removed.  This weekend, the manager is going away for the holiday, so he dropped Ginger off with us: 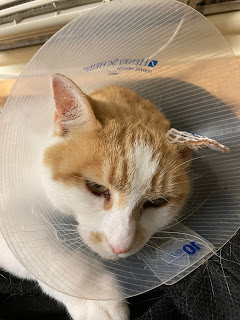 So far, it's been a tough night for my precious kitty.  She'd been caterwauling to go out until I bribed her with some kitty treats, and she's having problems scratching under the cone (I was able to give her a hand with a neck scratch).  She's even a bit short-tempered... my coworker Tim tried to comb her (she's shedding something fierce) and she swatted at him.

It's going to be a long, tedious week for my coned cutie.  I've been extra generous with the treats, trying to make up for a non-ideal situation that my dear girl can't understand.  I've been using treats as bribes to occupy her as I hastily exit the building when necessary, to maintain her house arrest.  I'm just hoping that, for the next couple of days, she decides to sleep more than the typical fifteen hours per day.  There will plenty of time to scout around the property once she is fully recovered.

Awww, get well soon, Ginger! It's so miserable to be recovering, but you'll be good as new in no time!

Thank you for sharing your thoughts. I really appreciate your efforts and I will be waiting for your further post thank you once again.

Thanks for your well-wishes for Ginger. She's been handling this really well, with a most un-feline patience.