An Ugly Picture of a Handsome Boy

The picture came out better than I expected it would, it was literally a shot in the dark, taken in haste lest the subject decided to bolt.  When I arrived at work, the largest stag that's been haunting our site was lying down in a well-shaded section of our property between the parking lot and the main building.  He was startled by my headlights, enough to convince him to stand up, but not enough to get him to bolt.

The stag moved into the bushes across from the main doors, and stood still while I walked toward the entrance.  At one point, we were probably about seven feet apart, close enough for me to see the shiny wetness of his nose.  I made sure to move slowly, with no sudden motions, and took out my smartphone.

The light wasn't good, and I had to hastily attempt a focus in the dark, but the picture came out better than I expected: 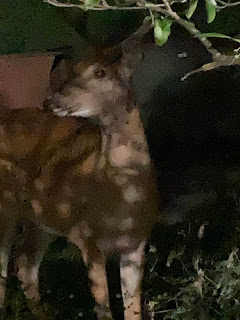 I think the image has a bit of an impressionist air, with its soft focus and ambiguous lines.  It's not a pretty picture, but the subject is a very handsome boy.

The photo’s not bad, considering, and that is a very handsome lad

They are a nice-looking bunch. He's the most skittish of the group.