It's a measure of someone's iconic status when news of their death is the headline story on another nation's national media. Aretha Franklin was a towering figure in 20th and 21st Century popular music, and her passing has inspired some moving tributes, Robyn Pennachia's Wonkette post collects a bunch of them, and serves as a beautiful memorial.

Aretha's storied career, with her first album being released at the age of fourteen, is a great précis of American postwar music, encompassing gospel, blues, jazz, R&B, and rock-and-roll... and she defined soul music.

Here's Aretha fronting the Ray Bryant Combo in a great jazz album from 1960:

Aretha was intimately involved in the Civil Rights movement of the 1960, lending moral, morale, and financial support to the movement. Her 1972 cover of Nina Simone's To Be Young, Gifted, and Black is a glorious paean to pride, to power, to excellence:

To many, her signature song is a cover of Otis Redding's Respect, which she transformed from a plea for domestic tranquility into a soaring anthem of the Civil Rights and Feminist movements:

I'm on record as being a huge fan of Puccini's Nessun Dorma and at the 1998 Grammy Awards presentation, Aretha sang it as a last-minute replacement for a sick Luciano Pavarotti:

The best testimony to a singer's power is their ability to elicit emotion in others, and this video of her performance at the 2015 Kennedy Center Awards ceremony perfectly showcases this, as she moves Carole King and the Obamas to tears:

President Obama's tribute to her was perhaps the single best take on her passing: 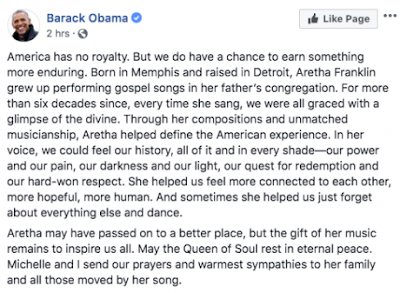 I sincerely hope that Aretha Franklin's full legacy is not glossed over- she was an activist as well as an artist. In an age in which the forces of repression and regression are trying to turn 'antifascist' and 'social justice warrior' into pejorative terms, it has to be stressed that Aretha was a fierce proponent of Civil Rights and Social Justice.

Dammit, EVERY time I read something written by President Obama, in lieu of the current occupoant's word salad, I get mad about the no-show voters of 2016 all over again.