Last night, while on the walkabout at work, I heard a scratching sound, which drew my attention to one of the neighbors: 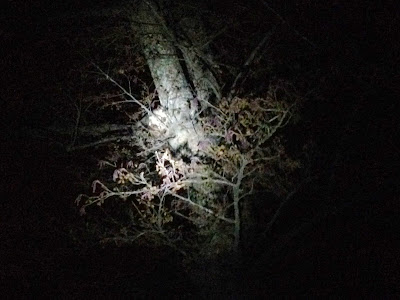 In the middle of the frame, in the flashlight's beam, you can just make out a face belonging to a North American opossum (Didelphis virginiana). Unfortunately, the tree branches made focusing on the 'possum's face impossible. 'Possums, along with the nine-banded armadillo and the North American porcupine, are the best-known "Southern" survivors of the Great American Faunal Interchange, with the opossum being the only marsupial living in North America. Our opossums don't hibernate, which is unfortunate, because it started snowing heavily soon after I took this picture. I will make sure to check the vicinity again tonight to see if I can find the little beastie.

North American opossums are famed for engaging in defensive thanatosis, feigning death in response to perceived threats, to the extent that "playing 'possum" is a colloquial term for feigning death or unconsciousness. This particular survival strategy is occasionally employed by other mammals.

Possums are around in W.V., but I rarely see them.

They're a lot more likely to be sighted coming out of the sewer in the alley behind the house in D.C.
~

Dirty, Smelly Poop Machines is my next band name.

The crazy thing is that 'possums were introduced to the West Coast, probably to provide a food supply. If I recall correctly, the same was done with bullfrogs.

They're a lot more likely to be sighted coming out of the sewer in the alley behind the house in D.C.

I think they do better in a semiurban, suburban environment. There's plenty to eat, and few predators. They don't fare too well with car encounters, though.

I often feel sorry for possums out here, I see them dead on the road so very often. Their little pointy faces remind me of my pet ferrets. As suburban neighbors go, I prefer them to the raccoons.