At a recent party I attended, the hostess assembled some whimsically creative appetizers: 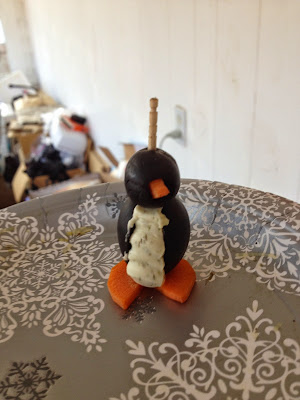 In (hopefully) uncharacteristic fashion, it took me a while to figure out what the little "penguins" were made of- a glimpse across the room had me wondering if they were some sort of confections. Thankfully, I was able to suss out the truth as soon as I got up close to them.

Being a big fan of the olive in all of its permutations (even as an improvised weapon, which brings us back to penguins), I scarfed these little things down as if I were a ravenous leopard seal:

Or a marine videographer...

It could have been a lot worse, I wasn't acting like a fur seal.

'Eat food. Not too much. Mostly penguins.'
~

OOPS! Thanks for pointing that out.

'Eat food. Not too much. Mostly penguins.'

One benefit of working alone is not having to explain sudden paroxysms of laughter.

Both the picture and the video.

That must have been a lovely experience, interacting with those cute/ugly, gentle creatures.