Last week started off on a happy note, we had a surprise visitor on site and were able to find him a home. The week took a turn for the worse, though, and I have to confess that I have been bummed out since Friday, when I received some bad news on the job. In the interest of topicality, I decided to wait until today to reveal my melancholy mood.

Back in 1998, my former co-worker Peter, who relocated to Virginia a few years ago, found a tiny gray fuzzball in his neighborhood and named it after basketball great Moses Malone. He brought Moses the kitten to work, where he found employment as a mouser. Moses pretty much had the run of the property for a good fifteen years, and came to be loved by staff and visitors alike. When I started working here in 2006, I was immediately taken by the cat, with his luminous amber eyes and his silky gray fur. I'm a cat person to begin with, the family always had cats when I was growing up. Moses was something special- I've met many wonderful cats in my day, and Moses ranks pretty high up in the pantheon of felines.

Last Thursday, when the three site cats were brought in to the local animal hospital for their annual checkups, the veterinarian noted that Moses had lost two pounds since his last vet visit late last winter. Moses had been looking a little gaunt lately- he had been on thyroid medication for a couple of years, and had had a couple of teeth pulled recently. Well, on Thursday, the veterinarian discovered that Moses had an inoperable cancerous tumor in his mouth. The site manager who brought the cats in to the veterinarian returned to the site and revealed the bad news to everyone. He contacted Peter, who had found Moses and brought him to share in our work and our lives. Peter gave his consent to the agonizing decision to euthanize Moses to end his suffering. Today, the site manager is bringing Moses to the veterinarian who had taken care of him during his tenure here for the last time. As you can imagine, everyone in the organization is devastated. The plan is to cremate Moses' remains and scatter his ashes throughout the site he "ruled" for fifteen years after a memorial service.

When Moses was a kitten, Peter would place him in the hood of his sweatshirt in the colder months, and Moses would snuggle in it, contented. As an adult cat, Moses loved to jump on his human friends' shoulders and would often stay on one's shoulders for up to half an hour while one went about one's tasks. Here's a picture of Moses sitting on my shoulders on Christmas 2011, the most attractive "scarf" that I have ever worn: 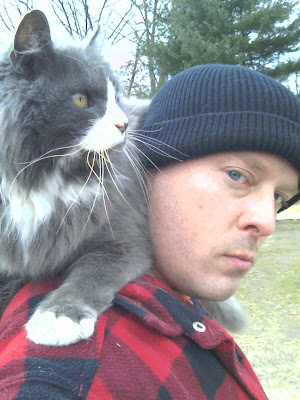 This moment was captured by the talented Zombie Rotten McDonald. I will bring the sketch into work when we conduct our memorial service for our beloved coworker.

Our company e-mail server has been filling up with eulogies of Moses. One former co-worker sang his praises, and put him in the great company of mousers that have guarded mills and granaries since time immemorial. A great and admirable bunch! Another coworker related a touching story about a pair of cat lovers who met Moses on a visit to our site:


Our good friend Moses was sitting - posing, more like - on a bench... A middle age couple came by - instantly recognized as cat people - and began admiring Moses as so many visitors have.
Of course, I happily regaled them with his who and what abouts. Then, as he scratched Mo on the head and chucked his chin, the gentleman declared simply:

"Yep, he's the right cat for this place!"

Just that; not a word more or less.

Yep, Moses in summation, ..."The right cat for this place"


The right cat for this place indeed... the place won't be quite the same without him. Goodbye, Gray Mouser, you will remain forever enshrined in the hearts of your coworkers.

Posted by Big Bad Bald Bastard at 1:52 AM

It's the downside of our deal with the kitties.

I just bid him goodbye one last time.

Always heartbreaking to say goodbye to our beautiful furry friends.

Sorry to hear it.

So sorry. May he scamper after little mousies in heaven.

THERE is sorrow enough in the natural way
From men and women to fill our day;
And when we are certain of sorrow in store,
Why do we always arrange for more?
Brothers and sisters, I bid you beware
Of giving your heart to a dog to tear.
Buy a pup and your money will buy
Love unflinching that cannot lie
Perfect passion and worship fed
By a kick in the ribs or a pat on the head.
Nevertheless it is hardly fair
To risk your heart for a dog to tear.

When the fourteen years which Nature permits
Are closing in asthma, or tumour, or fits,
And the vet's unspoken prescription runs
To lethal chambers or loaded guns,
Then you will find - it's your own affair, -
But ... you've given your heart to a dog to tear.

When the body that lived at your single will,
With its whimper of welcome, is stilled (how still!),
When the spirit that answered your every mood
Is gone - wherever it goes - for good,
You will discover how much you care,
And will give your heart to a dog to tear!

We've sorrow enough in the natural way,
When it comes to burying Christian clay.
Our loves are not given, but only lent,
At compound interest of cent per cent,
Though it is not always the case, I believe,
That the longer we've kept 'em, the more do we grieve;
For, when debts are payable, right or wrong,
A short-time loan is as bad as a long -
So why in - Heaven (before we are there)
Should we give our hearts to a dog to tear?

I'm sorry. Condolences all the way from Denmark.

And I thought nobody read Fritz Leiber but me! I hate losing pets...I get into a melancholic mood every time one of the ferrets goes to the vet, reactive dread of a sort. So sorry that beautiful shoulder accouterment is gone.

Thanks for all the well-wishes, everybody. I'm in the middle of my mid-week "weekend", and I imagine that things will be weird when I return to work tomorrow.

I will miss trying to get my sometimes reluctant feline co-worker back into his workplace after a day of mooching lunch scraps from visitors and coworkers alike. More importantly, I'll have to figure out how to keep my neck warm this winter.

Oh no! I actually teared up as I read this post. Maybe sniffed a time or two as well. :(

So sorry. I know he'll be missed.

Condolences to you an your collegues BBBB. Fuck cancer.