This post is dedicated to Mr John Gray, who opens up his heart and his home to take in strays.

As regular readers of my blog know, my job is not a normal 9-to-5 gig at all. Well, that goes for most of my co-workers as well. Sunday night, when I arrived to work the Monday graveyard shift, my co-worker **REDACTED** greeted me with some excitement and told me that he had something he had to show me at once. Something which wasn't an emergency, but something of interest. He led me to one of the sheds on site and introduced me to George: 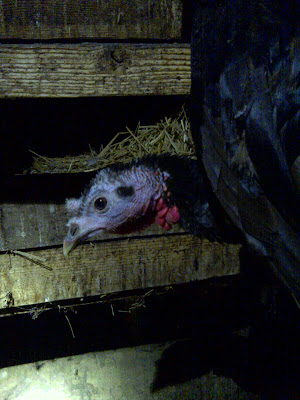 At some time on Sunday, a wild turkey (Meleagris gallopavo silvestris) (PDF link) showed up on site. The bird, a young male (the horn-like projection on the head or "snood", the dewlap, and the "beard" on his breast indicate that he's a boy), was so tame that he'd approach humans, so the Manager on Duty surmised that the bird had been taken and hand reared by someone who decided that he was getting too big to keep, and decided to "dump" it over our fence. Our property is spacious and verdant, and there have been previous incidents of unwanted animals, usually chickens, being heaved over the fence.

After the day shift left, my co-worker **REDACTED** received a call from his son, who was instructed by mom to run some errands, but needed to borrow some cash from dad. After the cash exchange and the supermarket run, the father-and-son team managed to herd the bird into one of our sheds for shelter during the night. The son dubbed the bird "George" (I didn't know he was old enough to know this meme).

George found a nice roost in the shed and settled down for the night. When it got light out, I headed out to the shed to check up on him. Here's a closeup of George's head, so you can see his varicoloured skin: 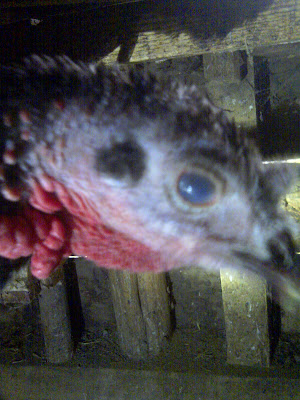 George generally looked healthy, but his tailfeathers and wing primaries were ragged, perhaps from confinement in a cage: 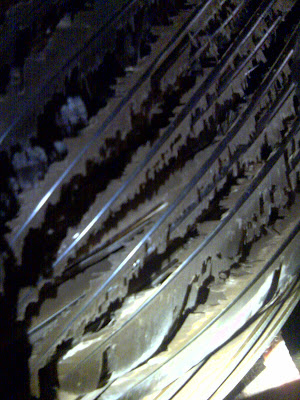 Before heading out to the shed, I grabbed some wind-fallen apples and cut them into chunks, which he eagerly gobbled up from my hand: 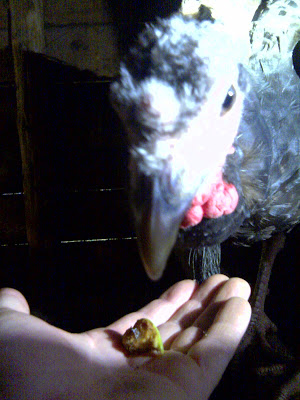 I left a note with the day shift so they knew to expect a turkey in the shed, and noted that he liked apple chunks. When I got to work at quarter to eleven, I noticed a cut-up apple near the shed, and am sure that they took a shine to him. Meanwhile, my co-worker **REDACTED** has made some calls to wildlife rehabilitators and tried to determine if any nature center would be able to take him in. He will probably need some acclimatization to the wild, but I think he could be relocated to one of our locations where there is a sizable flock of wild turkeys.

If it were feasible to ship George to Wales, I have no doubt John would welcome him to the farm.

POSTSCRIPT: When I work the graveyard shift, one of the last duties I have to perform is opening up the site for the day shift and for the influx of visitors. While performing these tasks, I checked out the log that the day shift keeps (it's in another building on site, so I didn't check it beforehand) and there's a note that George has been taken to the Bear Mountain Trailside Museum and Zoo. It's nice to know that he'll have a good home, shared with other rehabbed birds, and that he will be a marvel and a joy to the visitors. I sure hope a whole lot of kids will be charmed by him, just as I was.

Posted by Big Bad Bald Bastard at 2:55 AM

decided to "dump" it over our fence

He may have been dropped from a plane by someone who thought that turkeys could fly.

If it were feasible to ship George to Wales,

Trebuchet World Airlines will be happy to solve all your travel and shipping needs, and at a reasonable price!
~

Turkey Trebuchet? Let's not tell George. I don't really like turkey. But I think I would like George. I am so glad he found a home.

There used to be quite a flock of wild turkeys at a nearby wildlife park....over 300 of them. However, the part sponsored putting out nesting sites for eagles.

In a few years....about 5 or 6, the eagles devoured all the turkeys. Nature in action and all that. Lucky George, to be somewhere else!

I think I need some eagles for my neighbours.