The daughter of my youngest brother, Gomez, plays on a top-tier traveling ice hockey team, she is following in her father's footsteps, by which I mean skate ruts, though she isn't a goalie like her pop. This weekend, she has a tournament in New England, so Gomez, his wife, and the kids came up to New York City. It was my nephew's first visit, and my niece's first visit since she was a baby, when she came up for my brother Sweetums' wedding.

I met up with them in midtown Manhattan, the corner of 34th and 7th to be precise. We headed over to the Empire State Building, which I hadn't visited in years, and zipped up to the 86th floor observation deck, where the views are spectacular, though overcast conditions prevented us from seeing the wide horizons. I wish that the entrance fee was on a sliding scale correlating to percent-visibility, but that's me. As much as I love the Empire State Building, my favorite building in midtown is the Chrysler Building, with it's art deco style and prominent aquiline gargoyles: 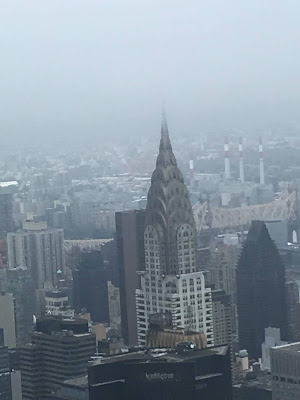 We followed up with a circuitous route through midtown, stopping by the main branch of the NY Public Library, then hitting the gorgeous Grand Central Terminal so they could take a gander at the marvelous ceiling, adorned with depictions of constellations. They hit a Yankees branded store to pick up some merchandise for the obscure local baseball franchise (my brother's wife is from upstate New York, so she is a lifelong fan, as is my downstate-bred brother), then it was off to an NHL-themed store, where they could buy NY Rangers merch for my brother and niece, and Buffalo Sabres merch for my sister-in-law and nephew... they have a friendly rivalry in this instance.

I scored a major coup by treating them to a late lunch/early dinner at a pub which shares my sister-in-law's maiden name, and persuading the manager to sell us two of the bar's pint glasses, which bear not only the name, but the crest of the extended family. It was an unlooked-for victory, and the glasses are destined to be Christmas presents for Gomez' mother-in-law.

After dinner, we walked up the tony 5th Avenue, where we visited St Patrick's Cathedral, then headed up to... uhhh... Trump Tower, where my sister-in-law and the kids stopped inside, while Gomez and I lounged outside, talking about how New Yorkers have detested Trump since the 80s, when he reneged on his deal to save the decorative facades of the old Bonwit Teller building which he demolished to build his personal demesne. With this side-trek out of the way, we headed through the Artists' Gate of Central Park, and the kids climbed various large rock formations for funny photo ops. A brief saunter through the southern verge of the park, and it was out the Merchants' Gate and into Times Square, where we took in the spectacle of Spectacle. We pretty much kept to Broadway, which is lined mainly with retail stores, with an occasional restaurant. With a constant drizzle, hanging out outside wasn't that appealing a prospect. We eventually ended up a few blocks from where we began, the subway station at 42nd St in Times Square. We parted ways, with them headed downtown, and myself headed back to the Bronx, having gotten a lot of the touristy stuff out of the way so that we can concentrate on museums when next they head back up to my brother's ancestral homeland. Every once in a while, it's nice to play the tourist in the old hometown.