This Is Serious Business! We Are Serious People!

The office which I share with my subordinates houses the site's lost-and-found box. Items of clothing, an occasional backpack... all end up in our office in a large box. We actually have a good track record for returning important items- lost wallets, lost phones. I always tell people, "Write down your name and contact information and we will make an effort to return your item to you." I've had people tell me, "Oh, I'll never get it back." They are invariably surprised when they get the call that their wallet or phone has been found.

Certain items, it's impossible to return if nobody gives us a description... hats, gloves (lotta little kid gloves get lost in the colder months), sweatshirts. Occasionally, toys get left behind. Our new office mate is Lizzy: 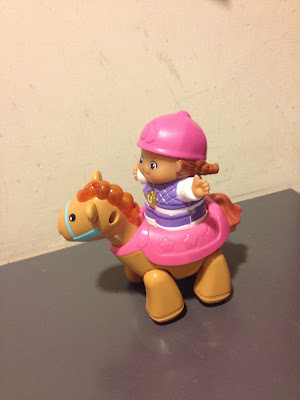 Lizzy is a jaunty, chatty little equestrian... I actually googled her backstory, so I could figure out where her 'off' switch was so I didn't kill her batteries. When on, she delivers one of several catchphrases and her plastic pony is off to the races. For some reason, one of my co-workers put the toy on my desk... I don't get THAT bored sitting around late at night.

Unfortunately, I can't figure out how to reprogram Lizzie's programed speech so she can take a level in badass:

Oh, well, it's not like we have a Skeletor action figure for Lizzie to hinder...

I also found a 'pillow dachshund' on top of another box under my desk... the place is starting to look like a used toy store: 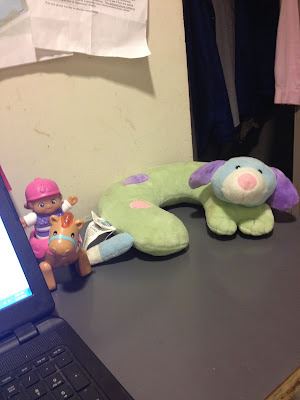 These items were probably lost at our Labor Day weekend fundraiser. If nobody claims them, I'll give them to our weekend cleaning lady. She has three young children and I'm sure they would get a kick out of this toy. At the risk of sounding like a total sap (I blame it on reading The Velveteen Rabbit as a kid), toys should be played with, should be enjoyed by children. Lizzie deserves to be cherished, and if the original owner doesn't show up, my friend's children deserve a chance to cherish 'her'. Regarding neck-pillow dachshund... I think I just might keep it... I love the feel of plush on my bald head.

Fringe benefits of the job!

You need to proudly wear that Doxy neck pillow next time you take a flight somewhere.

Fringe benefits of the job!

It's a pity nobody leaves behind a case of Balvenie single-malt Scotch.

You need to proudly wear that Doxy neck pillow next time you take a flight somewhere.

TSA would love that.

Might as well play with your toys while you still have them, B^4.
~