Last month, inspired by a post about pokeweed by Thunder, I posted about pokeweed and the country-rock standard Polk Salad Annie. We actually have quite a bit of pokeweed growing on-site here, far north of the Mason-Dixon line: 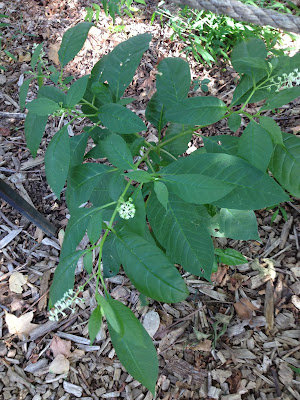 I was actually lucky enough to encounter a couple of small poke plants, small enough to be solidly in the 'pick me' category: 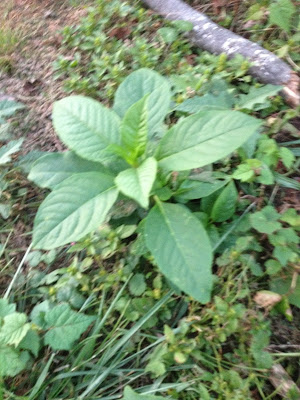 Erring on the side of caution, I boiled the pokeweed that I had harvested in three changes of water, then sauteed it in some olive oil with some garlic. The greens have a nice flavor, similar to that of spinach... and I consumed them without any ill effects, though they do tend to 'clean you out' very well if you know what I mean, and I think that you do. I can readily see a small amount of pokeweed becoming part of the weekly foraging take, in season. We have a secondary growth of stinging nettles coming up, and the pokeweed would be a good accompaniment for the nettles and lamb's quarters in my typical green slurry.

So, now that I'm a poke-eater, I guess that I could qualify for a song of my own:


Polk Salad Bastard, the dude likes getting plastered.
Everybody thought it was a joke, that this Northern boy is chowing down on poke.
A big, bald, Schick razor shaving bastard.


I found a really great cover version of Polk Salad Annie by Sammarinese singer Little Tony (who's a better Ciacci than Scott Baio ever could be). I particularly like this version because he was singing the song phonetically and made some charming errors due to his unfamiliarity with such regionalisms as 'truck patch'. I find this version a lot of fun, but not quite as much fun as Tony Joe White's duet with Johnny Cash:

I think Italians would 'get' the whole polk salad thing- Italian cuisine specializes in making bitter things delicious, and pokeweed seems like it belongs alongside such greens as escarole, arugula, and radicchio. I think poke would go well with beans, which like pokeweed can be poisonous if prepared incorrectly. Like poke, they can also clean you out really well.

You can eat stinging nettles?

I grabbed hold of some last eyar, and I don't know that I'd want them inside me.

Nettles are actually delicious, and nutritious, even though you should wear gloves when you harvest them. Once parboiled, dried, or pulverized, they cease to sting. They have a nice mild taste and complement other greens very nicely. When I go foraging, I usually pick bits of multiple plants, so I chop them all together, and sometimes add them to chopped spinach or turnip greens.

Nettles would be a good addition to a saag dish, come to think of it.

I was in Ashburn this weekend, and the pokeberry bushes had only 5-15% of their berries left. The mockingbirds and catbirds had been joined by the cardinals in gobbling whatever was left.
~