While walking around the jobsite, I spied an uncharacteristic flash of turquoise blue on top of one of our fences: 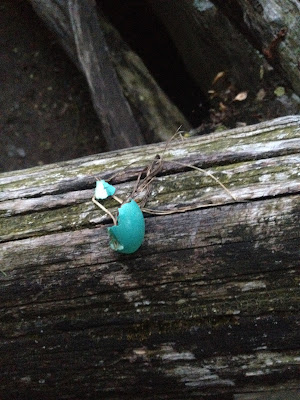 This sad, broken thing is the shell of an American robin's (Turdus migratorius) egg. The distinctive color of the American robin's egg has been enshrined in paint and crayon descriptors. This can pose confusion for American readers who aren't familiar with the eggs of the European robin (Erithacus rubecula):


No: the face was more mask-like than expressive. It symbolised her way of life, not her immediate thoughts. It was the colour of a robin's egg, and as closely freckled. Her hair was black and thick but she had hacked it away, a little above her shoulders. Her rounded neck was set straight upon her shoulders, and was so flexible that the liquid ease with which she turned it was reminiscent of a serpent.


What, my teenaged self asked, the fuck is he getting on about, when his descriptions are usually so exact? OHHHHHHHH!!!

This leaves the mystery of how this forlorn, broken egg got on top of the fence. Of course, Nutkin is known to eat eggses, and even chickses, on occasion, so I think I'll blame him. He has picked up some bad habits, after all.

"The blue–green pigment biliverdin is an antioxidant, the deposition of which may signal antioxidant capacity".

May have evolved in Turdus species (according to one theory) as a visible signal from the mother to the father that the egg represents a significant maternal investment, and is particularly viable, and therefore deserves some paternal investment in terms of sticking around and helping to feed the chicks.

He has picked up some bad habits, after all.

I saw this and thought of ZRM:
http://boingboing.net/2016/05/12/crazy-squirrel-stalks-selfie-w.html

Nutkin just wanted to spend a few moments talking with her about our rodent lord and savior, S.C.
~

If I met a girl with a green/blue face, I might describe it as "mask-like," too.

That he was talking about European robins will be my second choice.

Nutkin just wanted to spend a few moments talking with her about our rodent lord and savior, S.C.

I think Nutkin wanted to bang her jacket collar.

If I met a girl with a green/blue face, I might describe it as "mask-like," too.

STRANGER: I wear no mask.
CAMILLA: (Terrified, aside to Cassilda.) No mask? No mask!