Surprising, but Certainly not Upsetting

Wow, who would have thought that Antonin Scalia would just suddenly die with no warning? Antonin Scalia did untold harm to countless human beings, both here and abroad. The cliché is that a picture is worth a thousand words, but I'm going to cheat by displaying a picture that contains words, a PNG file to be exact: 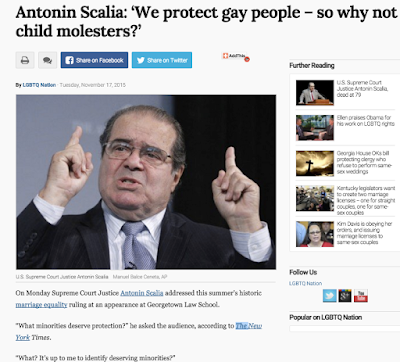 Yeah, that was a human simulacrum which actually compared consenting adults in caring relationships to child molestors. I really can't get upset at his passing. I imagine that he was planning on participating in one of those horrible canned hunts before he croaked... his hobbies were just as awful as his life's work.

The next eleven months will be characterize by Republicans attempting to block the Kenyan Usurper from nominating a successor- all the more reason to get the hell out and vote this year.

Unless it's somehow Ted Cruz.

To be precise, they won't be 'trying' to block Obama's nominee.

They will be BLOCKING Obama's nominee. There is simply no mechanism that can force McConnell to take up a confirmation vote. And even if he does, there are numerous procedural tactics available to individual Senators to block any vote.

I WILL be interested in seeing who he nominates - they have to 1.) be in the game for at least a year and 2.) be fully aware they will never be a supreme court justice. I'll also want to see if Obama understands what he's facing and pushes a liberal in their face or if he once again tries to give them someone they can confirm. Because they're not blocking his nominee - they're blocking HIM and it really doesn't matter how 'moderate' his choice is.

Over/under on a confirmation: July 2017 if a Democrat wins the election, March if a Republican wins...

The logical outcome of one political party getting away with being a spoiled toddler.

And they do get away with it, because...they serve the interests of the richest few.
~

Unless it's somehow Ted Cruz.

Be afraid. Be very afraid.

To be precise, they won't be 'trying' to block Obama's nominee.

Yeah... it's that habit of couching one's terms... I think President Obama should nominate Michelle Obama for the position. She's a legal scholar and it would cause heads to explode.

And they do get away with it, because...they serve the interests of the richest few.

Has Obama ever tried to push liberal politicians? He filled his Administration with corporate Dems from the get-go, and any liberals were jettisoned quickly during his first term. Certainly his pick for DNC chair (Debbie Wasserman Schultz) has a long record of avoiding liberals...

P.S. Thanks, B^4, even got a Charles Pierce retweet for one of my hobby-horses (the War Criminal Post).
~

Has Obama ever tried to push liberal politicians?

If only he had already appointed a couple of people to the court you could find as examples of what he might do. Too bad, really.