Today was the first day of the regular tourist season. We've had various group tours and a couple of special events, but this was the first day the doors were open to the general public for regular tours. I got to work with two of my favorite co-workers, a sweet woman who, like my mom's mom's mom had, has Graubünden roots, and a hilarious, flamboyant rocker gal who wears a ton of eccentric jewelry and used to be in an almost-up-and-coming band in Germany in the late 70s (the latter took these pictures last year). Visitation numbers were good- several tours had to be added to the schedule.

When things quieted down, I ascertained that the loon is still on site- my first sighting of it was two weeks ago. As an added treat, there was a osprey on the premises, perched in a tree in the same vicinity that the loon tends to occupy.

Behind our visitors' center, the gorgeous flowering bushes (I'm pretty sure they're Viburnum) are giving off a most delightful fragrance: 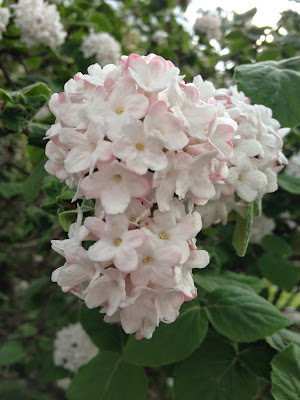 The daffodils are still doing quite well. More importantly, my stinging nettles are coming in like gangbusters, and I plan on picking a bunch of them tomorrow so I can make creamed nettles on my day off- I've gotten pretty good at making Yorkshire pudding over the past month or so, so I'll probably split the little things open so I can fill them with nettles.

I'm happy to say that our opening day was a success, and I hope that it portends a great upcoming season. I'm actually pretty optimistic here.

How does one wear used to be?

Congrats on the successful day!
~

Optimists are wonderful people..... Mind you they are so often disappointed

How does one wear used to be?

Optimists are wonderful people..... Mind you they are so often disappointed

I have a good cynical streak which I employ for defense.

I'm from Yorkshire and Yorkshire Pudding is best served as a starter to a roast dinner with the puddings covered in gravy made from the meat juices. Any leftovers can be eaten cold with strawberry jam, lemon curd or treacle / golden syrup.