Wonderful Weekend at Work, With One Sad Note

This weekend was great- it being the first weekend that the workplace is open for visitation. The weather was lovely, the wonderful seasonal part-timers who make up the bulk of the organization (most of them retired from other careers, people with several part-time jobs, or people whose spouses are the primary breadwinners) the crowd was nice (I had to yell at a father and teenage son who were wrestling a bit too intensely to "take it down a couple of notches"- it's all fun and games til someone loses and eye... and then it becomes a sport), and the daffodils were in profusion: 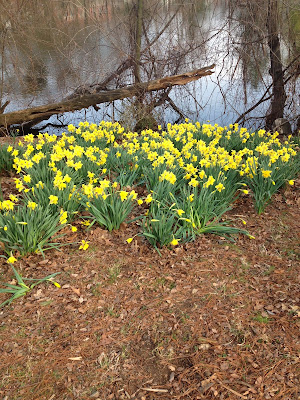 With a few dozen staff members and a few hundred visitors on site, Ginger was in her glory, jumping on people's laps and making sure she was the center of attention: 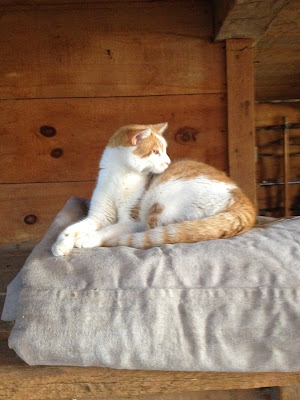 The real story here is that Fred has largely come out of his shell- he would typically run like hell and hide when large crowds descended on the site, but today he plopped himself down in a comfortable spot and gloried in the attention of visitors who wanted to give him friendly ear scritches. Here is an "introspective" looking Fred: 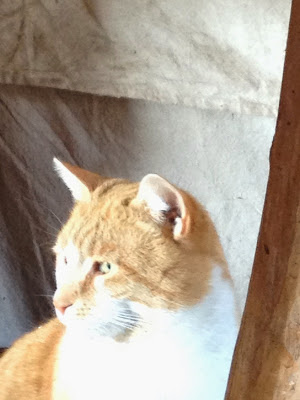 After the crowds left, I ran around for almost an hour locking the place up for the night. Now that everybody's away and the cats are tucked away in their assigned meesing locations, I am enjoying a gorgeous, warm night under an almost-full moon: 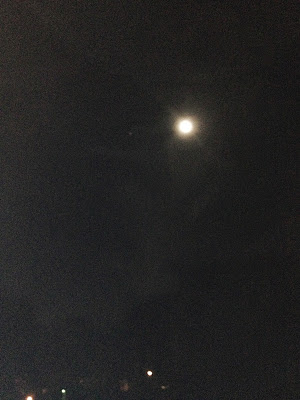 There's one bummer to report- one of my co-workers just received a diagnosis of Huntington's Disease over the winter- she is now working out what combination of long-term disability insurance and early retirement benefits (she has twenty years with a department of the New York state government) will suffice to keep her afloat. Her neurologist told her that her high level of activity (she volunteered as an EMT as well as working two jobs) will have an impact in offsetting the neurological deficits she is undergoing. One major goal of Huntington's treatment is fostering plasticity in the brain- gotta keep those neurons connecting. I was hit hard by this revelation because this woman does not have an ounce of meanness in her body- she's one of the most generous spirits I've ever encountered, and I've been lucky to know some fine, fine people all of my life. She's tough, and an optimist, so she's coping as well as anyone I've ever known, but it pains me to see such a skillful person hit with such a debilitation condition.

Since you're repeating thunder's plants, me too.

And here I thought you were referring to the secret love between dog and turtle, M.B.

My condolences to your co-worker, B^4.
~

Since you're repeating thunder's plants, me too.

That Doris Day was a real humdinger!

And here I thought you were referring to the secret love between dog and turtle, M.B.

That's better than the open hate between turtle and dog.