While I have been following the news today, I thought I would post about the family cabin in Maine before returning to reality. The Beaver Shores Club started off as a branch office for a logging company, the cabin being built in the early 1900s. My grandfather, still a teenager, pooled his resources with a bunch of friends and family members from Framingham, Massachusetts and bought the cabin in 1926. It was a rustic, two room building with a wide porch, and no electricity or plumbing. It sported a white paint job until recently, when it was outfitted with a pretty green metal roof and given a yellow preservative stain. Here's what the building looks like, viewed from the dock: 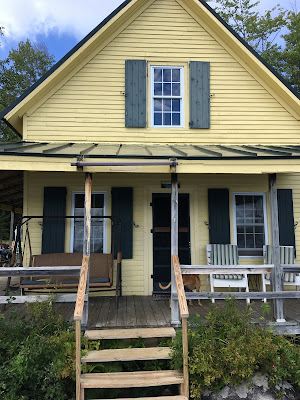 As you can see, the cabin is right on the shore of the 'great pond'- step off the porch and you are in the water: 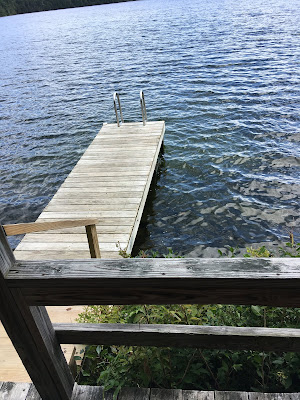 While the most rustic building in the vicinity, it has the choicest site- new buildings have to be two hundred feet from the water. Beaver Shores Club actually predates the great pond, which was formed by the damming of a local tributary to the mighty Kennebec River to provide drinking water for the local communities. It and a handful of older camps have been grandfathered in, most of them owned by families from nearby towns or other Framingham families who decided to follow in my the tradition of my grandfather and his cohort.

The panoramic view from the front porch never fails to stir my heart: 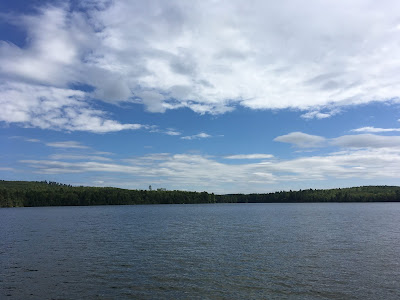 It was hear that my siblings and I, like our aunts, uncles, and cousins, learned how to rough it- to split logs for the stove, to transport potable water five miles down the road from a spring, to handle boats. More importantly, it was where we learned to associate eerie late-night cries with the local loons, to see stars invisible in our New York skies, to live according to nature's schedule- up with the sun, asleep not too much later than sundown. It is a beautiful place, a perfect place for city folk to gain an appreciation for rurality.

Note: The dog on the porch in the first picture is Reilly, my cousins' dog, who is a three year old black mouth cur, the sort of athletic dog that is perfect for this sort of setting.

It really sounds lovely. Thanks for posting about it.

Thanks, Janet. It's nice to be able to wax poetic about someplace in these here United States.

i have always enjoyed my time in maine - i spent a few weekends there decades ago, and have from time to time throughout my life traveled through it on my way to nova scotia from massachusetts

i have a framingham connection - my mother grew up there, i was born there and lived there for first grade, and a summer of my college years - this was at my grandparents' home

reading of how the house was there before the big pond reminded me of jane yolen's book "letting swift river go" - an account of the creation of quabbin reservoir - it's a picture book, but the words are worth reading by themselves:

The Quabbin reservoir is near my house,
one of the largest bodies of fresh water in New England.
It is a lovely wilderness;
eagles soar overhead and deer mark out their paths.
But once it was a low-lying valley called Swift River,
surrounded by rugged hills.
There were towns in the valley filled with hard-working folks
whose parents and grandparents had lived there all their lives.
Then, between 1927 and 1946, all the houses
and churches and schools – the markers of their lives –
were gone forever under the rising waters.

The drowning of the Swift River towns
to create the Quabbin was not a unique event.
The same story – only with different names –
has occurred all over the world
wherever nearby large cities have had powerful thirsts.
Such reservoirs are trade-offs, which, like all trades,
are never easy, never perfectly fair.

When I was six years old
the world seemed a very safe place.
The wind whispered comfortably
through the long branches
of the willow by my bedroom window.
Mama let me walk to school all alone
along the winding blacktop,
past the Old Stone Mill,
past the Grange Hall, past our church,
not even meeting up with
Georgie Warren or Nancy Vaughn
till the crossroads.

Georgie and I fished the Swift River
in the bright days of summer, catching brown trout out of the pools
with a pin hook and a bit of thread.
We played mumblety-peg
in the graveyard
and picnicked on Grandpa Will's stone,
the black one that stayed warm all day
by soaking up the hot summer sun.

And many a summer night
I slept out under the backyard maples
with Nancy Vaughn.
We'd listen to the trains
starting and stopping along Rabbit Run,
their long whistles lowing into the dark,
startling the screech owl
off its perch on the great elm.
Lying there, looking up
at the lengthening shadows of trees,
we'd see the fireflies
winking on and off and on.

One night Nancy Vaughn
and her cousin Sara from the city
brought three mason jars to my house.
We caught fireflies in them,
holding our hands over the open tops.
Mama came out to watch.
She shook her head.
"You have to let them go, Sally Jane,"
she said to me.
So I did.

In the deep winter
Papa harvested ice
from Greenwich Lake,
and Mama kept the stove going
in the house all day and all night.
I slept under three eiderdowns
and Grandma‘s quilt.
Later, in March,
we put buckets up on all the maples,
dipping our fingers down into the sap
and tasting the thin sweetness.

But then everything began to change.
The men went to the Grange Hall
time after time after time. The women, too.
Only nobody asked us kids.
They all listened to men from Boston
because the city of Boston, sixty miles away,
needed lots of water.
Boston had what Papa called
"a mighty long thirst,"
and no water to quench it.
We had water here in the valley:
good water, clear water,
clean water, cold water,
running between the low hills.
We could trade water for money,
or water for new houses,
or water for a better life.
So was voted in Boston to drown our towns
that the people in the city might drink.

First we moved the graves:
Grandpa Will's black stone,
and the Doubledays and the Downings,
the Metcalfs and the Halls.
Papa read the headstones on the trucks
as he helped to gather the small remains,
haulling them to the new cemetery
where everything would be fresh and green.
Sometimes all the men
found were buttons or teeth
or a few thin bones.
Papa said they left the Indians
where they lay.
No one wanted to bother with them,
but I thought it right
they remain in sacred ground.
The blackflies were fierce,
Papa said, fierce.
He had bites under his eyes,
swollen like tears.

Then the governor sent his "woodpeckers"
to clear the scrub and brush,
to cut down all the trees:
the maples and elms,
the willows and sycamores,
and the great spreading oaks.
They were stacked like drinking straws
along the roads,
then hauled away.

Our houses came next.
Some were bulldozed.
One great push, and they went over
after one and two centuries
of standing strong
against wind and snow and rain.
George and I watched them push down
the Old Stone Mill
till the windows of one wall
stared out like empty eyes
at the far-off hills.

Mr. Baxter‘s house went by truck
along the blacktop
to its new home in another town,
slow as any child going to school.
Nancy and I ran alongside for a ways,
but it had more breath that we did.
We stopped, panting,
and watched till it was out of sight.
Then Mama and Papa and I
moved away to New Salem,
one big hill over, and into a tiny house
where my room was warm all winter long.
Nancy and her folks went to the city
to be near her cousin Sara.
I never heard where Georgie went,
never even got to say good-bye.

Strangers came with their big machines,
building tunnels and caissons,
the Winsor Dam and the Goodnough Dike.
Papa brought me over to watch
most Friday afternoons.
"You’ve got to remember, Sally Jane," he said.
"Remember our town."
But it didn’t seem like our town anymore.
There were no trees, no bushes,
no gardens, no fences,
no houses, no churches, no barns, no halls.
Just a long, gray wilderness,
just a hole between the hills.

The waters from the dammed rivers
moved in slowly and silently.
They rose like unfriendly neighbors
halfway up the sides of the hills,
covering Dana and Enfield,
Prescott and Greenwich,
all the little Swift River towns. It took seven long years.


Much later, when I was grown,
Papa and I rowed out on the Quabbin Reservoir.
Behind us we left a bubble trail.
Through the late afternoon
and well into the evening
we sat in the little boat
and Papa pointed over the side.
"Look, Sally Jane," he said,
"that’s where the road to Prescott ran,
there’s the road to Beaver Brook,
that’s the spot the church stood
where we had you baptized.
And the school.
And the Grange Hall.
And the old Stone Mill.
We won’t be seeing those again."
I looked.
I thought I could see the faint outlines,
but I could not read the past.
Little perch now owned those streets,
and bass swam over the country roads.
A rainbow trout leaped after a fly,
and the water rings rippled through
my father's careful mapping.

When it got dark
the stars came out,
reflecting in the water,
blinking on and off and on like fireflies.
I leaned over the side of the boat
and caught the starry water
in my cupped hands.
For a moment I remembered
the wind through the willow,
the trains whistling on Rabbit Run,
the crossroads where I had met
Georgie Warren and Nancy Vaughn.
Gone, all gone, under the waters.

That I heard my mother’s voice
coming to me over the drowned years.
"You have to let them go, Sally Jane."
I looked down into the darkening deep,
smiled,
and did.

Nothing evokes the northern wilderness like whiffling, echoing loon signals over a lake in the woods. People call them eerie, mournful, but I find them reassuring and spine-tinglingly beautiful at the same time... those superb creatures, essential parts of the primeval environment, conversing knowledgably in the dark. They know their waters, they know the wind and weather, they know how to live their lives.
Thanks for posting this.

That's lovely, mistah charley, and it's nice to know there's a Framingham connection.

Yeah, Li'l, that sound gets into your nervous system and never leaves you.