I have written about Moxie before. It's been a while since I've been up to the family cabin and stocked up on the stuff, which tastes like root beer with a bitter purple gentian root aftertaste. I drink the stuff mainly to be contrary, and to remember my paternal grandfather, who drank it unironically.

I was first drawn to the stuff by its distinctive logo, featuring a dapper fellow pointing in almost accusatory fashion, as if to say, "I dare you to drink this fierce stuff!" On first taste, the bitter edge is the defining characteristic, and this is where most people jump off the Moxie train. The tale goes, though, that if you can drink it three times, you are a lifer.

Here's the classic label which caught my eye as a child, with the accusatory Moxie Man: 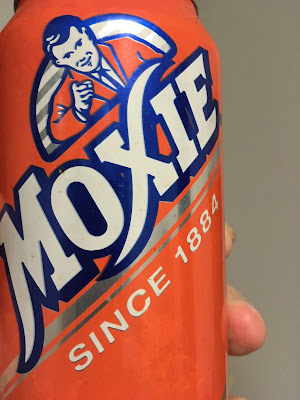 The can sits, unopened, on a bookshelf as an example of classic Americana. The logo was changed to a more generic one, a tragic branding misstep in my view. Here is a more modern can, from the reserve supply I maintain, irregularly replenished by family and friends who have returned from New England: 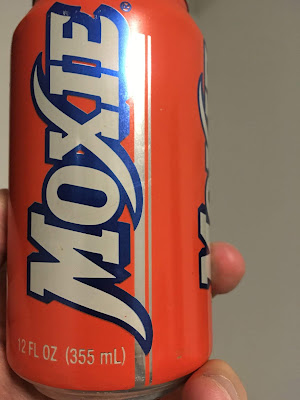 I figure on picking up a couple of cases to bring back to New York with me. Moxie was originally marketed as a nerve tonic, formulated to prevent 'softening of the brain and loss of manhood', neither of which I fear I am subject to. Even though it's illegal to market as a patent medicine, the axiom 'Moxie Makes Mainers Mighty', which inspired the post title, is still in use. Oddly enough, while writing this post before heading up to a rural spot with no electricity, much less internet access, I found an article about the Coca-Cola Corporation's purchase of the Moxie brand. I know that Coca-Cola is based in Atlanta... maybe those southron boys still fear Mainers and want to render their Moxie ineffectual.