No Trip Like the Nostalgia Trip, by Which I Mean the Fantasy Trip

The Tor Books site has a fun post about the 1977 Television special presentation of the Rankin/Bass animated film of Tolkien's The Hobbit.

I recently watched the animated film< and I believe that it holds up well. The character design is inspired by the illustrations of Arthur Rackham, a personal favorite of mine. Here's the Rankin/Bass version of Thorin and Company: 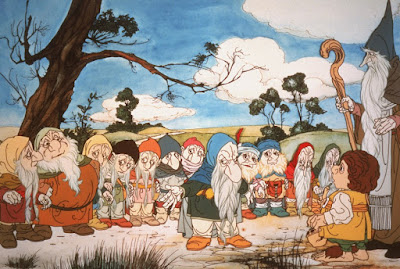 They look similar to Rackham's depiction of Henry Hudson and his crew from Washington Irving's Rip Van Winkle: 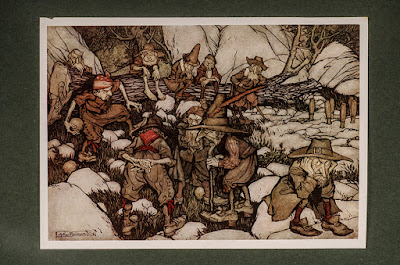 The animation in the film was done by Japanese company Topcraft, a precursor to Miyazaki's Studio Ghibli. The voice acting, featuring such Bastard favorites as Paul Frees and Don Messick, was excellent, with a standout performance by 'stand up tragedist' Brother Theodore as Gollum:

Yeah, not to badmouth Andy Serkis, who did a credible job as this creepy junkie analogy, but this is the real deal. Also, Peter Jackson put WAAAAAAAYYYY too much of this character in his movies.

Veteran actor Richard Boone also did a bang-up job as Smaug, perfectly portraying the arrogant, jaded dragon as a bully and a braggart playing cat and mouse with an unknown intruder:

The film, released in 1977, was a watershed moment in nerd culture, as the Tor piece asserts. A good portion of the kids viewing it ended up picking up the celebrated 1977 Dungeons and Dragons Basic Set and fantastic literature crystalized into a sub-Tolkienian orthodoxy... though it must be said that, judging from his gloriously purple prose, Uncle Gary was more of an A. Merritt fan.

Now, speaking of both nostalgia trips and fantasy trips, this year is seeing the resurrection of role-playing game The Fantasy Trip, which author/designer Steve Jackson was able to regain control over after it was killed off by an unscrupulous publisher who let the IP languish rather than sell it back to Mr Jackson at a reasonable price. This game, based off of a couple of skirmish-simulation microgames, was a favorite to play during short school breaks due to its speed and simplicity. I played quite a bit of it at school, and became adept at finding the more outré character builds while everybody else was stuck in that mighty sword rut... you see, I was also a big A. Merritt fan.

I was inspired to watch it again. They don't draw 'em like that anymore, & it's a damn shame they don't.

No mention of Otto Preminger as the King o' the Woodland Elves?

Oh, yeah, that was an unusual bit of casting. The whole voice talent roster is amazing. Thurl Ravenscroft is one of the singers.

I'm going to have to drag out my DVD copy of Rankin/Bass "Return of the King" for re-assessment as well.