No Need for a Nutcracker

I don't often eat lobster- it's expensive, so I only buy it on rare occasions when it is on sale. I also never order it in restaurants because I would make a scene. On those rare occasions when I eat the things, I put on a ratty T-shirt and shorts, keep a bucket of soapy water nearby, and eat outside. I pretty much disarticulate the whole bug with my bare hands, sea otter style, and extract every available molecule of meat from the exoskeleton, even the small muscles in the joint connecting the walking legs to the body. and the flat bits of meat inside the tail fins. Naturally, I eat the green globule behind the head of the lobster.

My mom had a frozen lobster tail that we decided to split for a real 'mixed bag' dinner. I broiled it with butter and lemon pepper. It wasn't as messy as a whole lobster, but I ended up disarticulating the shell and splitting the meat with mom. At the end, there was just a pile of ineffectual armor plates: 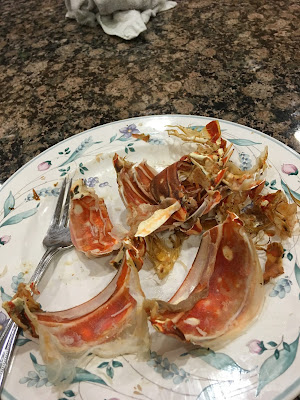 I realized that I eat lobster just like the mermaid in Splash did:

When you're built like a skull-cracker, you don't need a nutcracker.

You need to read the lobster-eating scene in"Nightlife of the Gods".

Thanks for the recommendation, old chum.