The Downside of the Deal We Make With the Kitties

I have some sad news to impart to longtime readers... my beloved Fred has been diagnosed with a cancerous mass in his belly. It's probably only a matter of days until he shuffles off this mortal coil. See, there I go with my Shakespeare again...

Fred came to us seven years ago, a package deal with his sister Ginger- both of them offspring of a feral cat which was being cared for by a two-legged former co-worker. At first shy around people, three months after his arrival he grew into perhaps the most loyal and devoted cat I have ever met. I fell madly in love with this cat one night after our major Fall fundraiser, when he trotted at my heels as I traversed a half-mile course from one end of the property to the other over the course of an hour, shutting down lights, locking doors, and making sure that everything was ship-shape.

Fred is one of those cats that acts like a dog- he has always been a calm creature, not prone to the jumpiness that characterizes a lot of felines. As I made my inspection tours of the property, he would be on my tail, while his sister would rove around us, checking out everything and occasionally stopping to give her brother a sniff or to get an ear-scratch from me. It grew to be a bit of a joke, I had two orange-and-white shadows which would follow me around the site.

Over the course of the years, Fred matured into a large, strong cat, an accomplished rodent-slayer and defender of storage areas. His was a handsome figure, a perfect representation of feline beauty and power: 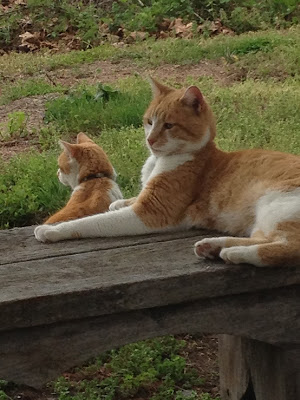 He was unfailingly affectionate with those fortunate people that he favored, and he'd often bump my hand in order to elicit a good scratching: 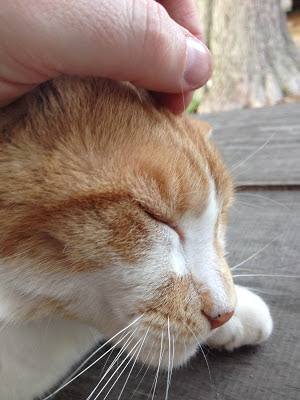 I am sad that Fred, who I believed I'd have years of future fun with, is on his way out at the all-too-young age of seven, but what really has me concerned is the reaction from his sister. The two have always been inseparable: 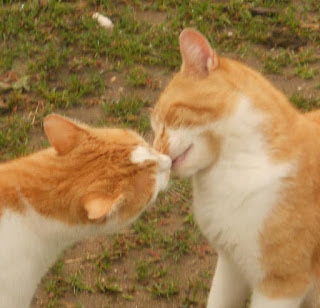 The two cats have been quite the comedy team, with Fred playing the mellow straight man to the boisterous, mischievous Ginger. Even today, Ginger caused havoc when a school group visited the site- instead of locking their bag lunches in the school bus, the school group brought them onsite, and Ginger got into a bunch of them, eating the Principal's sandwich and necessitating the hasty purchase of pizza by our shop manager. When they were younger, the cats had a knack for squeezing out of a small vent window and roaming the site until I'd put them back inside- typically, I'd put one of them back inside and the other would get out... a revolving door effect that I found more amusing than annoying. I never failed to laugh when I'd see a pair of tiny golden orbs bouncing towards me as one of the cats would bound over to join me.

A week ago Sunday, one of our managers brought Fred to a veterinarian's office when he appeared to be lethargic. We all thought Fred was merely overheated, but a follow-up visit to Fred and Ginger's usual veterinarian revealed that Fred had cancer. The vet prescribed Prednisone to bring Fred out of his torpor, but indicated that the prognosis wasn't good. Fred hasn't much of an appetite, and his activity level is way down. I have made it a point to stop by and give him attention on a regular basis, because I don't know when our last time to be together will be. I took this picture last night, Fred playing a bright spot in a darkened room: 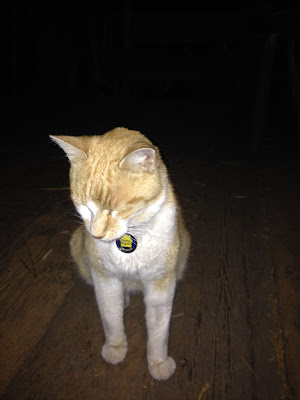 Four years ago, when I posted about the death of another of our storied mousers, the wise Smut Clyde commented: "It's the downside of our deal with the kitties." I knew the day would come when I would lose Fred, but I didn't think it would be coming so soon. Everyone on the job is sad at the prospects of losing our 'good' kitty... I just hope our naughty kitty can cope with the loss.

Yeah, she's the one I'm worried about. Co-workers who have had numerous pets suggested that she accompany Fred to the veterinarian's office so she can realize that Fred hasn't just disappeared on her.

Moses' final journey bothered her, and those two were constantly bickering.

I'm so sorry about this- peace and comfort for all of you.

Farewell skritches from all of us.

So sorry to hear about this. Earlier this year we lost a senior rescue. We thought we'd have her for a few years. Turns out we were doing hospice. It's hard. Condolences to all who have been touched by this life.

So sorry to hear this. I had to take one of our kitties on her last ride to the vet a couple weeks back. Cancer got her too.

Thanks for the outpouring of sympathy, folks, it really means a lot.

so sorry for the loss

Thanks for the support.