Today was a local election day. Typically, elections are held on Tuesdays, but yesterday being a holiday, the polls were open a day later. My workplace is a polling site, and there was a village mayoral election, so turnout was high for a non-presidential, non-November election.

When I arrived at work at 9PM, I found that there had been a bit of a kerfuffle on the job- the individual who armed the alarms onsite was not aware that Fred and Ginger were inside the building. The cats set off a motion detector and the police responded to the alarm. One of my co-workers ran out to disarm the alarm system and inform the police that there was no emergency. After he made sure the "emergency" had been handled, he found that the cats would not go calmly to the building they were assigned to "mouse". In fact, the cats followed him to our main building, which is where we host the polling site.

The cats caused a bit of a sensation... you'd think that people had never had dealings with cats before. My predecessor on site put them in a side room, where they would be out from underfoot. I arrived and let them out, so they could stretch their legs (I had to let Ginger outside so she could answer nature's call). Between the people oohing and cooing over the cats, there were others who were afraid that, if the cats got out of the building, they would "get attacked" or something, even though there was enough foot traffic to dissuade even the bravest of coyotes. I pointed out to one woman that these weren't housecats- "Look at the muscles on these cats, these are tough working cats, pretty as they are." I also pointed out that the cats knew where their food bowls were, so they wouldn't stray far. These cats follow me around a substantial piece of real estate at night, they aren't going anywhere. There's no need to worry about these two kittehs: 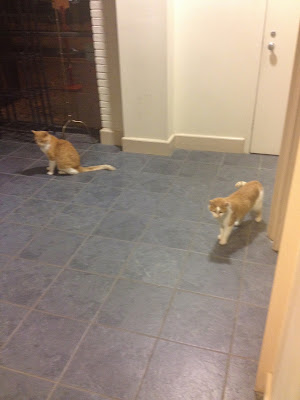 The cats were quite the hit. One fellow especially enjoyed hearing the story about the poor per diem worker who didn't realize that there were two cats.

Once things calmed down and the poll workers left, I was able to coax the cats into the building in which they are stationed on "rodent abatement" duties. A pocketful of cat snacks works wonders when one is trying to bribe two kittehs.

Sounds like Fred and Ginger had a great day!
~

They have a great day every day!

But of course! They have white and orange catsuits.