Today, we received another four-to-six inches of snow in my neck of the woods. Luckily, yesterday was warm and rainy, so a lot of the dingy stuff on the ground melted before a mass of cold air moved into the area around 4AM and the snow started falling. I woke up around noon and commenced shoveling, joining my next door neighbor in our snowday ritual. After clearing the snow in front of my place and a couple of neighbors' houses, I went inside to have a cup of coffee and put a pot of split pea soup on the stove. An hour later, I was shoveling again. The weather report on the radio had mentioned that the snow was tapering off... nice joke.

After sweeping the bulk of the snow off the car, I made sure to clear a patch of street behind my car so I could pull out of my parking spot easily when it came time to leave for work. Dealing with this weather is like a chess game, you have to think a few moves ahead.

The drive to work was pretty uneventful, once I got off the not-so-well-plowed side streets in my neighborhood. I had enough time to stop at a supermarket on the way, and, among the staples, bought a can of sweetened condensed milk so I could make snow ice cream: 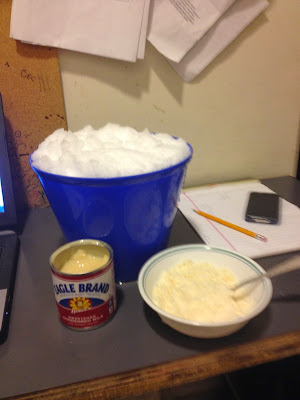 When life hands you lemons... I had never had snow ice cream before, but have been curious about if ever since reading Charles Portis' Masters of Atlantis. My favorite chapters in the novel involve an unlikely collaboration in a harebrained get-rich-quick scheme between all-American grifter Austin Popper and Mu-obsessed Romanian crank Professor Cezar Golescu (one of the greatest comic characters in American literature). In the novel, a young woman wooed by Austin Popper comes to call on him at the ramshackle house in which he and the Professor live, with a can of sweetened condensed milk among the dinner items she's bringing. Hilarity ensues.

The snow ice cream has a really nice texture. I wish I'd thought to bring some vanilla extract to jazz it up with, but the plain flavor was not bad at all. As nice as the snow ice cream is, I really am done with snow. I sure hope that this was winter's last gasp. If it's not, it might be mine!

Very resourceful. My hopes of having snow this year seem to have come to nothing. No snow ice cream for me. Damn this global warming.

It was about 6 inches in NW D.C., today opened below 20 degrees.

So I had to bust my rear end shoveling for the fourth time in 8-9 days. I am officially ready for spring.
~

My hopes of having snow this year seem to have come to nothing. No snow ice cream for me.

I'd love to send you a couple of shipping containers, so you could have a community ski weekend.

So I had to bust my rear end shoveling for the fourth time in 8-9 days. I am officially ready for spring.

Yeah, I was joking with the neighbors about how we all had the place shoveled on Monday.