The day being beautiful weatherwise, and I having the day off (plus, me being in need of a "mental hygiene" break after a bad week's worth of current events), I decided to drive to the corner of the city furthest from my home (I live in the extreme Southeast of the City of Y, a couple of blocks north of the Bronx and a couple of blocks west of "money earnin'" Mount Vernon) to visit two of Yonkers' most precious jewels. My first visit was to the Hudson River Museum, on Warburton Avenue, which overlooks the mighty Hudson. The Hudson River Museum combines a modern museum and planetarium with Glenview, a well-conserved mansion built in the 1870s: 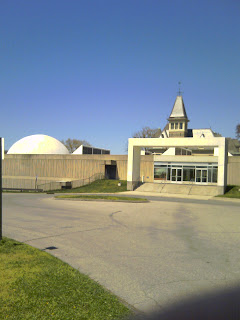 The setting of the museum is unparalleled, the views of the Palisades and the river is unexcelled: 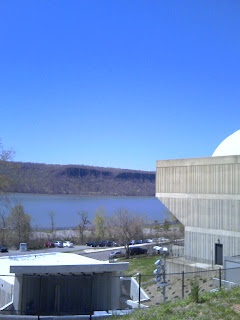 As one looks south of the museum, one is reminded of a less idyllic memento of the past- the abandoned Yonkers power plant, which is featured prominently in the wonderful book Hudson Valley Ruins (in the interest of full disclosure, I know one of the authors): 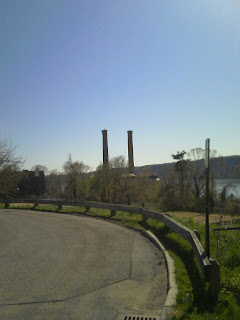 The museum was featuring an exhibit titled The Panoramic River: The Hudson and the Thames. The inspiration for the exhibit was The Rhinebeck Panorama, a panoramic depiction of London found in Dutchess County, New York. While I didn't take any pictures inside the museum (I don't know if flash photography is allowed, and I always err on the side of propriety in museums), I will post images of some of my favorite paintings from the exhibit.

John Henry Dolph's Haying Near New Rochelle is a nice pastoral scene set in an area which is now a small, multicultural city and foodie paradise. The body of water in the background is Long Island Sound, the Hudson being a few miles to the west: 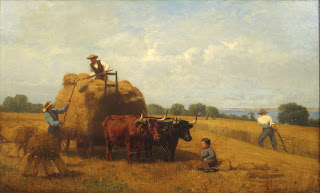 Another favorite of mine was James Bard's painting of the steamboat Francis Skiddy- gotta dig the "painting in a painting" motif, as the housing of the paddlewheel sports an image of the Hudson narrows: 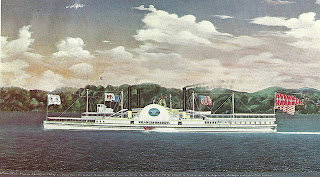 Another favorite of mine, George W. Wright's A Terrible Bore, which is part of the permanent collection, can be glimpsed on page two of the Museum's School Brochure PDF.

For a brief visual overview of the exhibit, here is a promo from a local public television station:

Another highlight of the Hudson River Museum is the Riverama, a permanent exhibit detailing the geology and ecology of the Hudson River region, and centered around a thirty foot long topographical model of the region. There is a video on the return of the peregrin falcon to the region (unrelated to the museum, but of note is the Mid-Hudson Bridge peregrin falcon cam), an exhibit on invasive species, a brief piece on the different sorts of boats plying the river, an interactive "wild sounds" console courtesy of the Cornell Ornithological Lab, and other nice interactive displays. It's a good introduction to the inner workings of the river, hydrologically, geologically, biologically, and sociologically. Pete Seeger would approve.

I followed my visit to the museum with a visit to Lenoir Preserve, which I mentioned in a blog post three years ago. The preserve is just as lovely as ever, and I'll have to return in a few months to see how some of the more ambitious projects underway are proceeding.

For a relatively small city (pop. 195,976 as of 2010), Yonkers does have a nice variety of cultural institutions. To be sure, midtown Manhattan is only a half-hour train ride away, but sometimes it pays to stay closer to home.

The Palisades are awesome, B^4.

Thanks, John! It's nice to see a reader from Cymru. I've put up a couple of posts about your homeland over the course of the years.