On Tuesday night, I headed down to the beautiful Bell House in the Gowanus section of Brooklyn for the latest Secret Science Club lecture, featuring astrophysicist Dr Jeremiah Ostriker, professor emeritus of Princeton University, currently of Columbia University. Dr Ostriker has enjoyed a long, storied career in astrophysics, and his latest book is the brand-spanking new Heart of Darkness: Unraveling the Mysteries of the Invisible Universe, co-authored with Simon Mitton.

Dr Ostriker's lecture was an overview of the study of astronomy and astrophysics, with a concentration on the developments in the field throughout the 20th century- a century of cosmological investigations which culminated in a paradigm that really works, but remains puzzling in many ways.

Dr Ostriker began with a brief survey of astronomical studies from the sixteenth to the nineteenth centuries, beginning with the work, from 1550-1650, of Brahe, Kepler, and Gallileo, who challenged long-standing views of a static cosmos with the Earth at its center, and created the model of the heliocentric solar system. From 1650-1750, Halley, Euler posited universal laws for the cosmos, and applied mathematical analyses to celestial matters. Thomas Wright described the shape of the Milky Way as "an optical effect due to our immersion in what locally approximates to a flat layer of stars." The sun is one star in a galaxy of stars. The majority of a galaxy's stars are near the center of the galaxy- our sun is far from the center of the Milky Way. He also speculated that the dim spiral nebulae were other galaxies, previously, such nebulae were not recognized as such. In 1924, Edwin Hubble confirmed that these spiral nebulae were indeed galaxies. Immanuel Kant elaborated on this theme, speaking of a universe composed of "islands" in the void. In the 1840's a great telescope named the Leviathan was built in the Irish town of Parsonstown specifically to explore the nature of nebulae.

In the 20th Century, Einstein, Hubble and Baade were instrumental in laying the foundations of modern cosmology- not only are there many galaxies, but the galaxies seem to be moving away from each other with a velocity proportional to their separation (an observation known as Hubble's Law. With the discovery that the universe is expanding, there was a question as to whether the universe will expand forever or if gravity will cause the expansion to decelerate and the universe will collapse. When Einstein formulated his Theory of General Relativity, he believed that the universe was static, and postulated a cosmological constant. After seeing Hubble's evidence of an expanding universe, he realized that the universe is not static- the cosmological constant is characterized as Einstein's "greatest blunder".

Physical theories were put on the back burner through much of the 20th Century as astronomers were trying to puzzle out other astronomical questions, such as the size and the age of the visible universe. In the years 1958-1975, ever larger and more powerful telescopes were used to estimate these cosmological parameters. A major breakthrough took place at a Bell Labs radio facility in Holmdel, New Jersey when physicists Arno Penzias and Robert Wilson detected background radiation from the Big Bang.

Additional surveys of the sky showed a large scale structure in galaxy positions- galaxies tend to cluster, and there are filaments between various clusters. The question of the origin of this structure, and the formation of galaxies after the Big Bang became of paramount importance. Immediately after the Big Bang, the elements were "cooking together"-the most common elements are the lightest ones: hydrogen, helium, and lithium. While the Big Bang theory seemed correct by the end of the 1960's, the density of observable matter was deemed insufficient to slow the expansion of the universe. A paucity of matter would lead to an increasingly empty universe, so why would the observed clustering take place... something crucial was missing from the cosmological model.

From 1975-1995, dark matter came into its own. Dark matter was initially proposed as an explanation for discrepancies between the visible matter and estimated total mass in a distant galaxy cluster by astrophysicist Fritz Zwicky in the 1930s. Simply put, the observable matter was insufficient to account for Zwicky's observations of Coma Cluster, a gluster of at least one thousand galaxies. Zwicky, who is largely unsung, theorized that clusters of galaxies are held together by the gravitational force of dark matter. Dark matter seems to be electromagnetically inert- it neither reflects nor emits light- the only observable indication that dark matter exists is its gravitational effect.

In 1977, Dr Ostriker observed that rotation curves showed that most of the mass of a galaxy is in the outer regions of the galaxy that have little light output. The mass goes up as one measures outward. Each galaxy has a vast dark halo. The total amount of matter in the universe is ten times what was originally thought when only visible matter was taken into account. At this point in the lecture, Dr Ostriker observed that Van Gogh was eerily prescient: 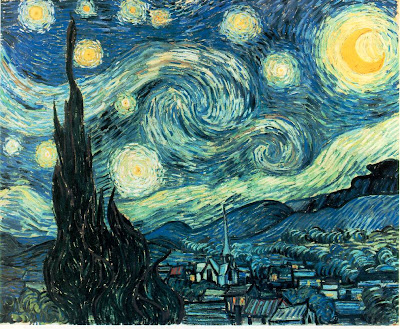 Perhaps the best evidence for dark matter was found around the year 2000, when observations of the Bullet Cluster, a cluster of two colliding galaxies, showed that dark matter is not merely composed of baryonic dust and gases, but is something completely different. Dr Ostriker likened the Bullet Cluster to the "Rosetta Stone of Gravity". In his Theory of General Relativity, Einstein theorized that light could be be bent by gravity, an effect known as "gravitational lensing. Gravitational forces, to a large extent resulting from dark matter, cause observed galaxies to form "arcs".

In 1991, the Cosmic Background Explorer satellite confirmed the basic prediction of the Big Bang- a universe filled with black body radiation. The "sky" is not uniform- it shows the seeds for stucture, evidence for dark matter. Tiny early fluctuations grew with time as the universe "evolved".

In the 1990's, evidence suggesting an increase in the pace of the expansion of the universe led to the theory that dark energy permeates the universe.

While the basic model of cosmology seems to work, big questions remain unanswered- what is the origin of the perturbations which gave rise to the structure of the universe? What is dark matter? What is dark energy? In addition, there are Modified Newtownian Dynamics, or MOND theories which posit alternatives to the dark matter/dark energy model, but these are not commonly accepted.

In the Q&A, Dr Ostriker discussed several characteristics of dark matter. Dark matter is not observable in the electromagnetic spectrum, merely by its gravitational effects. While dark matter may "collide", it is unknown whether gamma rays would result from such collisions- any ideas about the nature of dark matter are still theoretical. Closer to stars, baryonic matter is more common- dark matter is less dense. Dr Ostriker opined, "There may be one microgram of dark matter in this room". I looked, but the closest I came to finding it was a pint of Guinness.

At the end of the Q&A session, Dr Ostriker uttered one of the best lines I've ever heard in my life... upon answering the last question he said, "Shouldn't we stop this and start drinking?"

All told, it was another top-notch lecture presented by the Secret Science Club.

By far the most fascinating questions we, as humans, can ask.

Please allow me a shout out to Alan Guth, the most important cosmologist of our time, with inflationary universe theory, and Frank Drake, responsible for Drake's Equation.

So, Mr. Bastard, you are not a beginner in this discussion. What do YOU think comprises Dark Matter? Is it hot or cold? Massive, some kind of large halo objects, or some kind of weakly interacting particle? Is it neutrinos? Where are you on SuperSymmetry? Is the Standard Model essentially correct, or essentially broken? What of gravity - is there an explanation for the relative weakness of gravity that can account for particle physics and observed cosmology? Wanna hear what YOU think...

There was not a question from Some Bastard In The Audience.

Dark matter is clearly wingnut poop. I have the equation to prove it around here somewhere...

Dark matter is not observable in the electromagnetic spectrum, merely by its gravitational effects.

Also, swigging the special prescription cough medicine by the bottle.

I can't see any Van Gogh paintings anymore without thinking of Amy Pond.